THE VALUE OF AN OX 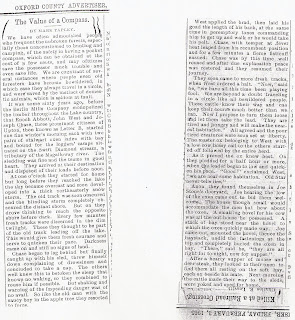 "We have often admonished people who frequent the unbroken forests, especially those unaccustomed to hunting and camping, of the safety in having a pocket compass, which can be obtained at the cost of a few cents, and may ofttimes save the possessor much trouble and even save a life."

So begins an article in the Oxford County(Maine) Advertiser of Friday,
February 3,1905. Entitled "The Value of A Compass," the article was
written by a Mark Tapley, who then goes on to illustrate his point with a
story of an event "some sixty years before" which would have been in 1845.
Three men from Letter B Plantation (now Upton) Maine set out with a wagonload
of hay by for the logging camp at Swift Diamond River: Enoch Abbott,
Joseph Chase, and John West. The latter was my 4x great-grandfather,
John Cutter West.

Of course, this was meant as a cautionary tale and Mr. Tapley tells
of how after traveling across a frozen lake and delivering their load the
party started back for home at 1 in the afternoon. But as snow began to fall
the trail across the lake was obscured and the three men became lost in the dark.
Joseph Chase decided he was going to lie down and take a nap, a fatal error
in the middle of a snowstorm. John West took a rather unique approach to the
situation by beating Chase with the ox prod until the other man was so angry he
jumped up to defend himself and the two men got into a fistfight.

Eventually they stopped fighting and John came up with a plan to get them all
out of their predicament. The wagon had been drawn by two pairs of oxen and
the lead ox belonged to John. He proposed they set the oxen loose and follow
their lead since "they are tired and hungry and will make for the nearest
habitation." And that's exactly what they did! The three men followed the
oxen to the home of a man named Joe Stone and so were saved.

You can read the full story in the clipping at the top of this post. It
was given to me by my Aunt Dorothy.

I learned a few things I didn't know from this newspaper story. One was that
John C. West owned one or more oxen and used them to deliver supplies to
logging camps. He did this by traveling across a frozen lake. (Think "Ice
Truckers" but with oxen.) Oxen would make more sense for this sort of
venture; they are slow but surefooted and even tempered, so easier to handle
while crossing a slippery surface. They also could handle the weather
better than horses, as you can see by reading the concluding paragraphs of
the article.

I wondered about the two other men, Enoch Abbott and Joseph Chase, especially
the first. I have Abbott ancestors but through the marriage of Clara Ellingwood
to my great grandfather Philip John West some fifty years after the events in the
story. Could Enoch be related through that line somehow? A quick check of
the 1850 census for Letter B shows Enoch and his family entered on the same
page as the West family. I checked for family trees and found one for his
family, and upon further investigation I discovered that Enoch had a son named
Otis. That rang a bell, and upon further investigation I found Otis was the father
of Valora Agnes Abbott, who married Leonidas West, one of the sons of John
Cutter West.

One of John's grandsons, Hiram, married an Eva Chase but I haven't found any
link to Joseph Chase.

Lastly, the most important thing I learned from this article is this:
when taking a hike in the woods, make sure you bring a team of
oxen!
Posted by Bill West at 2:28 AM

What a terrific find!