ANOTHER DIP IN THE GENE POOL

Last week Ancestry.com updated their Ethnicity Estimates on the results of the DNA tests people had taken. It was quite a topic of conversation on Facebook as the Estimate changed quite a bit for some people. It sure did for mine!

This is my original Ethnicity Estimate chart a year ago: 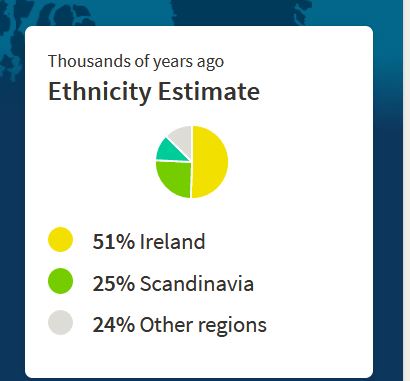 And this is the updated chart from last week: 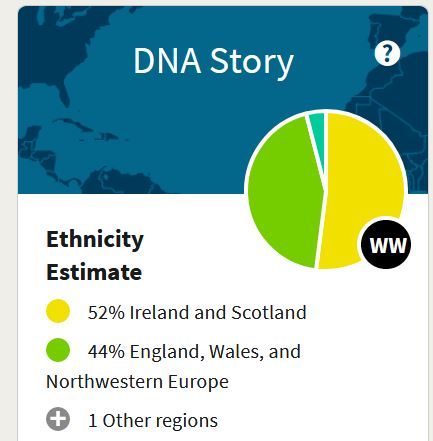 And so did the 24% Other Regions, which included: 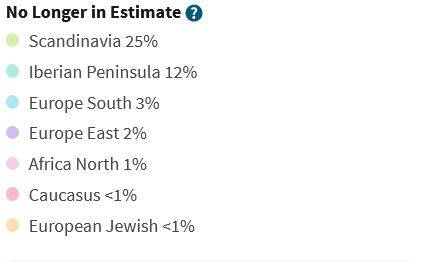 In short, all the exotic stuff. Sigh. 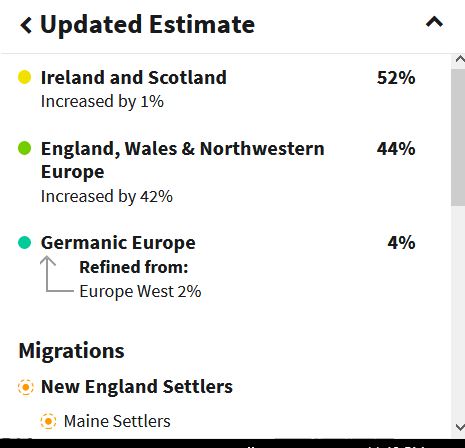 Two of my Mom's maternal great grandparents were immigrants from Germany; the rest of her family was Irish.

And Dad's ancestors were mainly English with a few Welshmen and Scots so they are now better represented.

The general reaction among my genealogy friends is that the new Estimate better reflects what they know about their families,and I think it does the same for mine, too!
Posted by Bill West at 1:04 AM No comments:

"AT NORRIDGEWOCK" BY JOHN GREENLEAF WHITTIER

I had started worrying I wouldn't find a poem for this year's Great Genealogy Poetry Challenge when I found this poem in an anthology edited by Henry Wadsworth Longfellow.There are three
reasons why this is perfect for my entry:

One, it's written by my distant cousin, John Greenleaf Whittier.

Two, it's about Norridgewock, Maine where three generations  of my Laughton family ancestors (all three of them named John Laughton) lived in the 18th century.

And three, it's about Fall.

AT NORRIDGEWOCK.
by John Greenleaf Whittier

T' is morning over Norridgewock, —
On tree and wigwam, wave and rock.
Bathed in the autumnal sunshine, stirred
At intervals by breeze and bird,
And wearing all the hues which glow
In heaven's own pure and perfect bow,
That glorious picture of the air,
Which summer's light-robed angel forms
On the dark ground of fading storms,
With pencil dipped in sunbeams there,—
And, stretching out, on either hand,
O'er all that wide and unshorn land,
Till, weary of its gorgeousncss,
The aching and the dazzled eye
Rests, gladdened, on the calm blue sky, —
Slumbers the mighty wilderness!
The oak, upon the windy hill,
Its dark green burthen upward heaves;
The hemlock broods above its rill.
Its cone-like foliage darker still,
Against the birch's graceful stem,
And the rough walnut-bough receives
The suu upon its crowded leaves,
Each colored like a topaz gem;
And the tall maple wears with them
The coronal, which autumn gives,
The brief, bright sign of ruin near,
The hectic of a dying year!-pp143-144

It's time to start thinking about a post for the Tenth Annual Great Genealogy Poetry Challenge!
Hard to believe I've been doing this for ten years now.

As in the past, I'll be posting the links to the submissions on Thanksgiving Day,which this year falls on Thursday, November 22nd. Deadline for submissions will be a week before, on Thursday, November 15th. That gives everyone  two months to find (or write) and share their poem or song. If you find one long before that deadline (as I have) you can post it on your blog now, but don't forget to send me the link to it before November 15th!

These are the Challenge rules:

1. Find a poem by a  poet, famous or obscure, about the region
one of your ancestors lived in. It can be about an historical event, a
legend, a person, or even about some place (like a river)or a local
animal. It can even be a poem you or one of your ancestors have written.
0r, if you prefer, post the lyrics of a song or a link to a video of someone
performing the song.

2. Post the poem or song to your blog (remembering to cite the source
where you found it.).  If you wish to enter an older post, you may as long
as it has not appeared here in an earlier Poetry Challenge.

3.Tell us how the subject of the poem or song relates to your ancestor's
home or life, or the area of the country where they lived.

4.Submit your post's link here to me by midnight Thursday, November 15th
and I'll publish all links to the entries on Thanksgiving Day, November 22nd!

5. If  you submit a humorous poem or song that will be entered under the
"Willy Puckerbrush" division. Willy was the late geneablogger Terry
Thornton's alias for some humorous posts and comments.

There you have it. You have two months to find your poem and post it to your
blogs. I will be waiting to see what you come up with this year!
Posted by Bill West at 3:07 PM 4 comments: