They are forecasting another snow storm here and it might
make this the snowiest December on record for the Boston
area.

It put me in mind of "Snowbound", a poem by John Greenleaf
Whittier that I had to read at some point at St Mathew's
Parochial School in Dorchester when I was a kid. It's a long
poem, but these lines from the first verse seem to suit
how December has been this year:

"The sun that brief December day
Rose cheerless over hills of gray,
And, darkly circled, gave at noon
A sadder light than waning moon.
Slow tracing down the thickening sky
Its mute and ominous prophecy,
A portent seeming less than threat,
It sank from sight before it set.
A chill no coat, however stout,
Of homespun stuff could quite shut out,
A hard, dull bitterness of cold,
That checked, mid-vein, the circling race
Of life-blood in the sharpened face,
The coming of the snow-storm told." 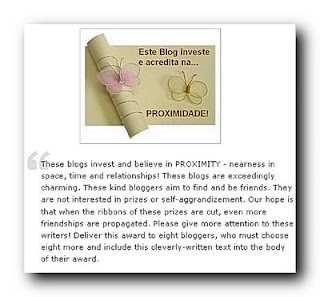 I'm extremely flattered to have been given the Proximidade
Award by the footnote Maven, a genea-blogger who certainly
precisely fits the definition of the Award. She's always ready
to help with a piece of art or a bit of good advice on genealogical
matters and source citations.

Now I in turn must present 8 more bloggers with the Award
and hope that I haven't duplicated someone else's choices!
The trouble is I have no idea how long this has been
circulating so I most likely will be choosing folks who
were previoulsy chosen. But at any rate, here they
are:

Walking the Berkshires by Tim Abbott

What's Past is Prologue by Donna Pointkouski

Arrrrrrgh, the pressure! I'll have to send
then emails tomorrow that they are award recipients,
but right now I need to go get some sleep!
Posted by Bill West at 1:04 AM 1 comment:

The topic of the 63rd Carnival of Genealogy is our New Years
Resolutions for our genealogy research. I thought I'd look back at
last December's list and see how I did before making the 2009
list with how I did in boldface:

"Well, it’s that time of year when folks make New Year’s
resolutions and we genealogy bloggers are busy making our lists.
So here’s mine.

One, to break that John Cutter West brick wall. (nope. not yet)


Two, to spend more time on my maternal line. I’ve found so much
lately about Dad’s side of the family that I feel like I’ve neglected
the Whites and McFarlands. So I’ll research more and blog more
about them and try to break down those brick walls as well. (not
much progress here.)


Three, to get my files better organized and correctly cite my sources.
(umm...yeah...needs work still)


Four, try to make it out to Ohio some time next year to visit
with my Aunt Dorothy and my cousins, including Diana and Louise.
(Yes! Had a great time and you can read about it in my
Road Trip series of posts.)


Five, try to get OUT to do research at the BPL main branch,
the NEGHS, the Massachusetts State Archives and the
Hingham Family Search Center. (I made it to the Hingham
FHS Center twice and that's it.)


Six, get all the pictures scanned. I am considering rearranging
my work station. At present, the printer is on the top shelf and
getting up and down to place or remove pictures may be good
for my health but it sure slows down the process. I may swap
fit where the cpu sits on the desk. As a result, still have
pictures waiting to be scanned.)


Seven, come up with more genealogy related uses for flutaphones!
(Sucess! But I'm worried about Janice Brown who instigated
my flutaphone list. Janice, where are you? We miss you!)

So, we’ll see how well I’ve done by next New Years!"


So given the successes and failures of this year's list, here's the
resolutions for 2009:

One, keep chipping away at the John Cutter West brick wall.

Two, do more research on my White and McFarland ancestry and blog more
on them.


Four, stay in touch with Aunt Dot and the rest of my Ohio relatives and share
what I find about our family history with them.


Five, get out to the Hingham FHS, the NEGHS, the Boston Public Library,
the Mass State Archives. I'm also adding the Boston Archdiocese Archives
when it reopens sometime next year.

Six, work on getting all the pictures scanned.

Seven, try to keep from getting bogged down on Facebook with application
requests. To that end, I'm not accepting any new apps. I hope this doesn't
offend anyone whose invitations I decline but when the requests get up into
the 70 and 80 request range, it cuts into the research time.


So those are my genealogical resolutions for 2009. Let's see if I can do
better with them than I did with the 2008 list. Tune in next year to find out!


Written for the 63rd edition of the Carnival of Genealogy.
Posted by Bill West at 2:30 AM 4 comments:

Email ThisBlogThis!Share to TwitterShare to FacebookShare to Pinterest
Labels: Carnival of Genealogy, genealogy

I've been a bit of a slacker lately with my geneablogging but I hope
to take up that slack in the coming days. I am planning a post on
my ancestor Simon Willard who I hadn't realized was such a prominent
figure in 17th century Massachusetts, And in the course of researching
Simon, I discovered that through him I'm a distant cousin of Miriam
Robbins Midkiff of Ancestories (9th, twice removed, Miriam tells me).

Hmm. There's another post I need to do, an update on the cousins I've
found through this blog.

I am also planning to write about my ancestors from Andover,
Massachusetts based on what I've learned from Elinor Abbot's book,
"Our Company Proceeds Apace" and examine the connections that
carried over into the settlement of Oxford County, Maine.

Dear Genea-Santa,
It's been a very good year for me genealogy wise on my Dad's side of the
family, so I guess I'd like some things that would come from my Mom's
family for Genea-Christmas:

1. A White Family Bible to go along with the West Family Bible that Aunt
Dot gave me for my birthday. Of course, I hope that the White Bible
would have the family birth, death, and marriage dates filled in.

2. A picture of my Mom's Dad, Edward Francis White, Sr. I'd like to know
what he looked like. All pictures of him were removed from the family
album and destroyed so this would fill in a big gap.


3. Some letters that my Great-Grandmother Anna Kelly McFarland might
have exchanged with her parents that might shed light on her experiences
here in a new country in the late 19th century.


I know these are mighty tall orders, so I'll settle for whatever genealogical
discoveries you can send my way(or nudge me towards)in the upcoming year.

footnoteMaven is continuing her geneablogger caroling tradition
so I'm chiming in with the 16th century hymn "Gaudete" which
I hear played everyday at work over the store speakers as performed
by the Irish choral group Anuna. Enjoy!

When we were kids we didn't have very many holiday traditions.
Holiday meals were divided between our house and my Aunt and
Uncle's place: if Thanksgiving was at our place, was Christmas was at
theirs, and New Year's Day we played by ear, depending on how late
the adults had been out on New Year's Eve.

Holiday dinners at Aunt Emily and Uncle Ed's was served in two stages:
first, the traditional turkey and all the usual vegetables. Then Nonny, Aunt
Emily's Mom, would bring out the Italian food: lasagna, meatballs, eggplant,
and other dishes whose names I don't recall. My Dad liked Italian food and
lasagna became a standard dish that was served at least once at either Christmas
or New Year's. Dad was also the designated turkey cooker for Thanksgiving,
getting up at 6am on Thanksgiving Day to get "the bird" started.


Some families out their Christmas trees up the day after Thanksgiving, but we
often waited until Christmas Eve before even going out to purchase a tree! This
often led to disagreements between Mom and Dad about the way the tree looked.
(Especially after we got it home. Christmas trees look better in a badly lit parking
lot than they do in the harsh reality of the living room lamplight.) Eventually the
age of artificial Christmas trees arrived and we struggled with inserting the
branches into the "trunk" in the proper order. Another Christmas Eve tradition was
the last minute gift wrapping. No matter how early Mom might have started her
shopping, there was always some gifts to wrap, usually those for our cousins that
would be delivered that very night or next day when we went to their house for
dinner.

A lot has changed over the years. Uncle Ed and Aunt Emily and their family moved
out of state. After my sister married, the holiday dinners rotated between her house
and our parents. Cheryl and her husband Pete began the tradition of exchanging
gifts at their house on Christmas Eve, which this year will move to her daughter
Sarah's house for the first time. Cheryl and Pete's Christmas tree is live and is
decorated with ornaments that they've accumulated over the years and that have
significance for their 3 children. And somebody at one of the holiday dinners makes
lasagna.

So some traditions have continued, while others have been replaced by new ones!


You can read more of my Christmas memories by clicking on the "Christmas"
label in the list on the right hand side of the screen.

Written for the 61st edition of the Carnival of Genealogy.
Posted by Bill West at 12:44 PM No comments: