There's two generations of the West family that I don't know much about. This is due to they were residents of Canada for all or part of their lives, so access to things like probate records are behind paywalls which is a problem for me. But I will keep looking and share whatever I can find here.

My 5x great grandfather Thomas West was born on 29Mar,1726, in Kingston, Ma. His mother Mary (Bearce) West died two years later, so Thomas was raised for most of his childhood by his father Elisha's second wife Martha (Ransom) West. Then when Elisha died in 1739, Thomas and his brothers became the wards of their legal guardian, James Bearce.

I don't know exactly why Thomas moved to Nova Scotia. It was well before the American Revoution, so he wasn't a displaced Loyalist. He may have been one of those New Englanders who took advantage of land made available to English speaking settlers during the French & Indian Wars.
I've been trying to locate a probate file for him but no luck as of yet.

As of last Saurday, January 23rd, this blog is 14 years old! There were times last year when I wasn't sure how much longer I would be able to continue, But I did, and here we are. I'm surprised I haven't run out of material to blog about; there's still a bit more and it's more a matter of me having energy that has kept me from blogging more frequently the last year. That's why I used more reposts  than writing more original items. I'm hoping that will change for the better in 2021.

Here's some blog stats as of today:

And here's my all time viewed posts: 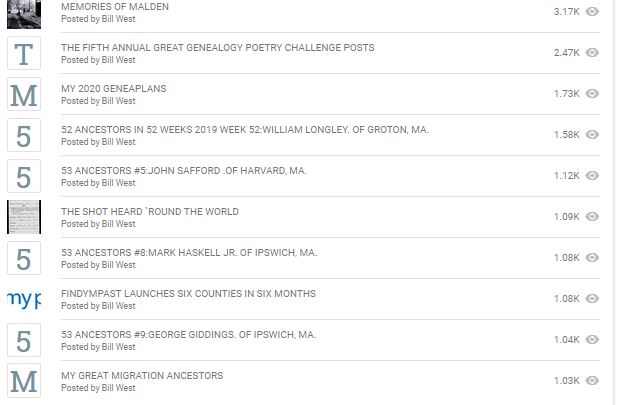 Thanks again to cousins Tim Abbott, Chris Dunham, and Randy Seaver whose geneablogs inspired me to start one of my own.

I came across an unexpected possible connection to my own life when I was researching  my 6x great grandfather Elisha West.

Elisha was married twice, first to Mary Bearce, and then to Martha Ransom. When he died in 1739, the guardianship of his eight children was divided between two men.

James Bearce was appointed the guardian of the four boys. He may have been their uncle or grandfather.

The four girls were put in the guardianship of Timothy Ripley. The Ripley and Ransom families were connected. I suspect Timothy may have been Martha's father or brother. Here's the image I found of the the guardianship document for one of the girls. 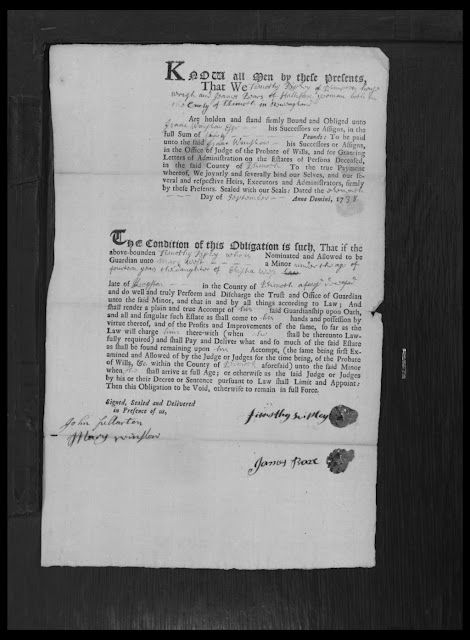 So, what's the connection to my life?:

Well one of my high school classmates and friends is Jeff Ripley, whose family has been here as long as my Dad's. So it's a good possibility that he's related to the Timothy Ripley  in 1739 helped take care of my ancestor's four daughters!

Genealogy is full of surprises!

Elisha 's will was presented at court on 4Apr 1738, I found the images of it at AmericanAncestors.org and it's fairly interesting. He left his widow , Martha at least fifty pounds and sums of money for each of his living children.   I can't say for certain if any of them actually received the amounts he bequeathed, though, because while there is an inventory of his estate, there is no list detailing the debts he may have owed.

I also found some documents regarding the guardianship of his children that have a connection to my own life and I'll discuss that in the next post. 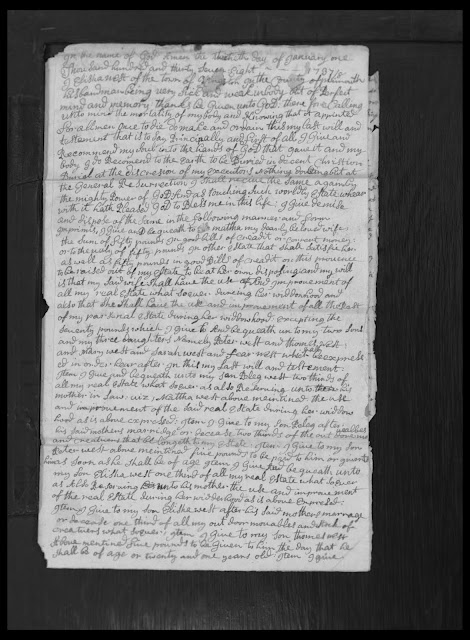