THE VALUE OF A COMPASS PT2

Continuing the story, my ancestor John C West was lost on a frozen lake in Maine
in a snowstorm with his friends Enoch Abbott and  Joseph Chase. When Chase
decided to lay down and take a nap, my 3x great grandfather took drastic measures:

"West applied the brad, then laid his
goad the length of his back, at the same
time in  peremptory tones commanding
him to get up and walk or he would take
his pelt. Chase with a temper at fever
heat leaped from his recumbent position
and for a few minutes a fierce fisticuff
ensued. Chase was by this time well
roused and after due explanations peace
was restored and they resumed their
journey.

They soon came to more fresh tracks
when West ordered  halt,  "Now," said
he "we have all this time been playing
fool We are beyond a doubt traveling
in a circle like all bewildered people.
These cattle know their way and can
keep their course much better than we
can. Now I propose to turn them loose
and let them take the lead. They are
tired and hungry and will make the near-
est habitation." All agreed and the poor
tired creatures were soon set at liberty.
The master ox belonging to West with
a low cow bossy call to the others start-
ed off followed by the entire herd.

As it proved the ox knew best. On
they plodded for a half hour or more,
when the leader began toi low and quick-
en his pace.  "Good!" exclaimed West,
"we are near some habitation. Old Star
never tells lies."

Anon they found themselves in Joe
Stone's dooryard. Joe hearing the low
of the oxen came out to bid then wel-
come. The house though small would
accommodate the men but how about
the oxen. A small log hovel for his cow
was all the out-house he possessed. A
stack of hay stood near the hovel to
which the oxen made way. Joe
came out, mounted the hove, thence the
haystack, undid the fastenings at the
top and completely buried the oxen in
hay. "There." said he, " they are all
right for to-night, now for supper."

After a hearty supper of moose and
deer steak, they looked to their oxen to
find them all resting on the soft hay,
each ox beside his mate. Next morning
the cattle made their way to the sleds,
were yoked and sped for home."

THE VALUE OF A COMPASS PT 1 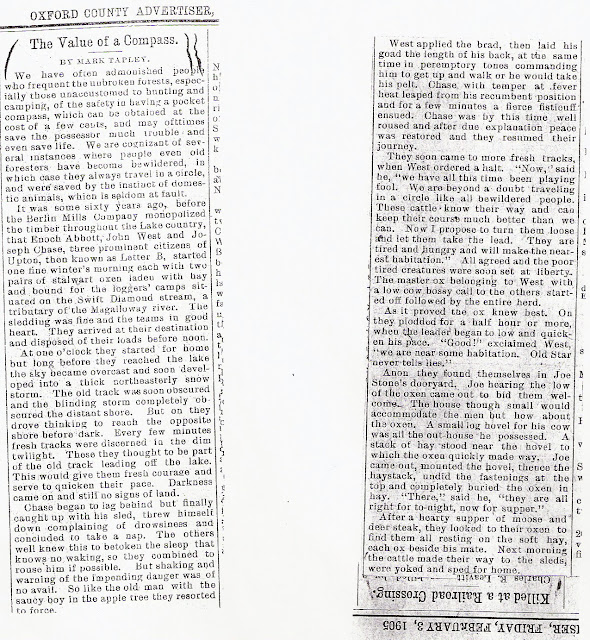 I've posted about this incident before but never actually transcribed the article
until now. It's about my3x great grandfather and two friends, Enoch Abbott and
Joseph Chase lost in a snowstorm in northwestern Maine. As we just weathered
the Blizzard of 2015 here in Massachusetts, I thought this was appropriate:

The Value of a Compass
by Mark Tapley

We have often admonished people
who frequent the unbroken forests, espec-
ially those unaccustomed to hunting and
camping,  of the safety in having a pocket
compass, which can be obtained at the
cost of a few cents, and may ofttimes
save the possessor much trouble and
even save a life. We are cognizant of sev-
eral instances where people even old
foresters have become bewildered, in
which case they can always travel in a circle,
and were saved by the instinct of domes-
tic animals, which is seldom at fault.

It was some sixty years ago, before
the Berlin Mills Company monopolized
the timber throughout the Lake country,
that Enoch Abbott, John West, and  Jo-
seph Chase, three prominent citizens of
Upton, then known as Letter B, started
one fine winter's morning each with two
pairs of stalwart oxen laden with hay
and bound for the loggers' camp sit-
uated on the Swift Diamond stream, a
tributary of the Magalloway river. The
sledding was fine and the teams in good
heart. They arrived at their destination
and disposed of their loads before noon.

At one o'clock they started for home
but long before they reached the lake
the sky became overcast and soon devel-
oped into a a thick northeasterly snow
storm. The old track was soon obscured
and the blinding storm completely ob-
scured the distant shore. But on they
drove thinking to reach the opposite
shore before dark. Every few minutes
fresh tracks were discerned in the dim
twilight. These they thought to be part
of the old track leading off the lake.
This would give the fresh courage and
serve to quicken their pace. Darkness
came on and still no signs of land.

Chase began to lag behind but finally
caught up with his sled, threw himself
down complaining of drowsiness and
concluded to take a nap. The others
well knew this to betoken the sleep that
knows no waking, so they combined to
rouse him if possible. But shaking and
warning  of the impending danger was of
no avail. So like the old man with the
saucy boy in the apple tree they resorted
to force.

To be continued, like all good cliffhangers.
Posted by Bill West at 10:25 PM No comments:

More and more records are coming online that are of use to genealogists and
family historians. The other night cousin Chris Dunham sent me an email to let
me know about the Oxford County Eastern District Registry of Deeds website.
Oxford County Maine is where my West and associated families moved to from
Massachusetts back in the late 18th and early 19th centuries. 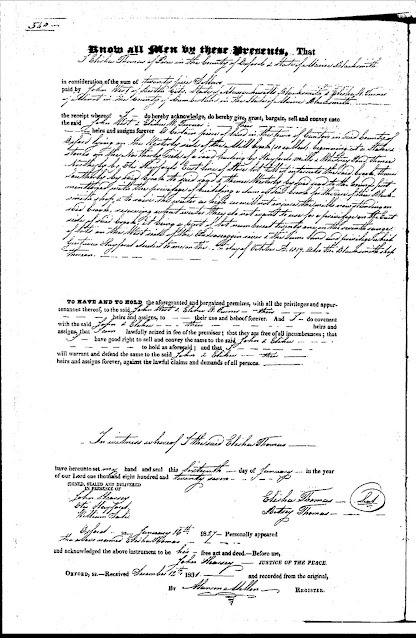 As Chris wrote:
"I'm not sure how deeply you've delved into Oxford County deeds, but I found
a record showing that John C. West lived in Boston before coming to Canton
and marrying Arvilla Ames.

I've attached the deed from book 36, page 540, by which Elisha Turner of Peru
sold to "John West of Boston City, State of Massachusetts, Blacksmith," and Elisha
W. Thomas of Minot, blacksmith, land in Canton with a blacksmith shop on it on
16 Jan. 1827.

In book 35, page 474, Elisha W. Turner of Canton quitclaims his share of this
property to "John West of Canton in the County of Oxford aforesaid Blacksmith"
on 17 May 1827.

This shows that John settled in Canton in the late winter or spring of 1827—at least
four months before marrying Arvilla. Just to establish that this was the same John
West (the records don't always give his middle initial), a deed on page 542 of book
36 has John C. West of Canton, blacksmith, selling to John B. Douglas of Letter B
the same land and blacksmith shop in Canton. This was on 9 Dec. 1831. The deed
has his wife Arvilla relinquishing her right of dower in the property."

Now this is the first time I've seen any document that has John Cutter West living
anywhere in Massachusetts other than Plymouth.  I don't know yet if John was related
somehow to either Turner or Thomas but how else would he know two blacksmiths
from Maine when he was living in Boston? The only other answer I can think of is
that perhaps they were apprentices together with another blacksmith and they decided
to set themselves up in business together in Maine.  Perhaps if I find an answer I can
break down the John Cutter West brick wall.

I went to the website and found quite a few records concerning my West family. Most
of them involve my 2x great granduncles Hiram F and Asa A West, but there are others
with transactions made by my 2x great grandmother Louisa A Richardson West and 3x
great grandmother Arvilla Ames West.  I checked this afternoon and there are also
many records involving my Ellingwood family, and I've still Richardson, Coburn, Ames,
and Barker lines to search for as well. It costs .50 cents to download a record but I plan
to go through them before I select what I want. I've already got 7 records for the sum
of $3.50!

Thanks, Chris for help and the heads up!

BTW,if you have Maine roots, be sure to visit Chris' Maine Genealogy Network page!
Posted by Bill West at 10:20 PM No comments: 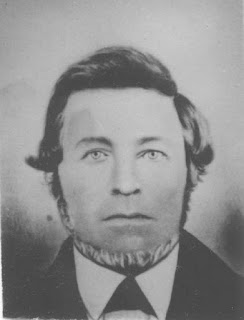 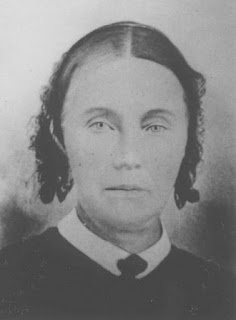 It's been awhile since I posted anything here but I'm hoping to change that. I'd been puzzling out how I wanted to proceed with the 52 ancestors posts because I was at a point in my West line where I'd already written quite a bit about John Cutter West and the next generations. So do I write entirely new posts or repost the earlier ones?

I decided on a mix of both, albeit most of the mix will be reposts. Too many good stories not to retell. And I've found new information to update some of them. So I beg my readers' indulgence if they've read most of this before.

My 3x great grandfather John Cutter West was one of  the ten children of Paul West and Hannah Crowell but the only one not born in Nova Scotia. He was born on 8Oct 1802 in Plymouth, Ma. For years this stmied me until I reasoned out that his mother, if not both parents, probably were visiting their relatives in Plymouth or Cape Cod since that was where both thier families were from originally. When John was a teenager he was apprenticed to a blacksmith in Boston.

And then he purchased a blacksmith shop in Canton, Maine. While there he met and married Arvilla Ames at Sumner, Me. on  23 Sep 1827. Their two eldest children were born in Canton before the family moved to Letter B Plantation (now  Upton)in Oxford County where the rest of their eleven children were born, one of whom was my  2x great grandfather Jonathan Phelps West.

John Cutter West died on 24Jul 1862 during a diphtheria epidemic that also killed three children, his daughter in law and several grandchildren. They are buried in a roadside cemetery in Grafton, Me.

Those are the facts. But as I said, there some good stories associated with those fats, and I'll be reposting some of them, and hopefully some new ones. 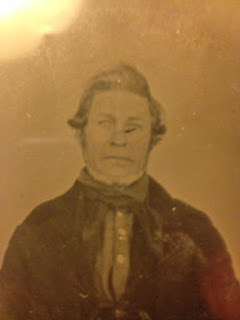 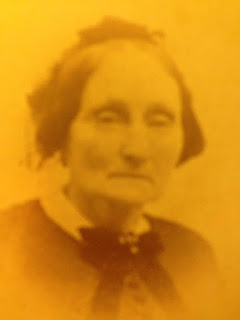