THE SHOT HEARD `ROUND THE WORLD

Today is the 245th Anniversary of the Battles of Lexington & Concord which
started the American Revolution on 19Apr 1775.

These are our colonial ancestors from our Dad's family lines for whom I have
so far been able to discover records that they took part in those battles and served in the
Revolution:

Jonathan Barker Jr. My 5x great grandfather
Was a Minuteman from Methuen Ma with rank of Sergeant.
He responded to Lexington and Concord with his sons
Served in Captain Samuel Johnson's Company in
Colonel Titcomb's Regiment for 2 months in 1777 in Rhode
Island and then with Nathaniel Gage's Company in Colonel
Jacob Gerrish's guards from Dec 1777 to l Apr 1778 guarding
the captured troops of General Burgoyne.

John Ames   My 5x great grandfather
Was a Minuteman under Capt. Asa Parker on April 19th,
1775. He then enlisted in the Continental Army under Captain
Oliver Parker, Col. William Prescott's Regiment and
in the Brigade that was commanded in turn by Generals
Putnam, Lee, and Washington and served for 8 1/2 months. 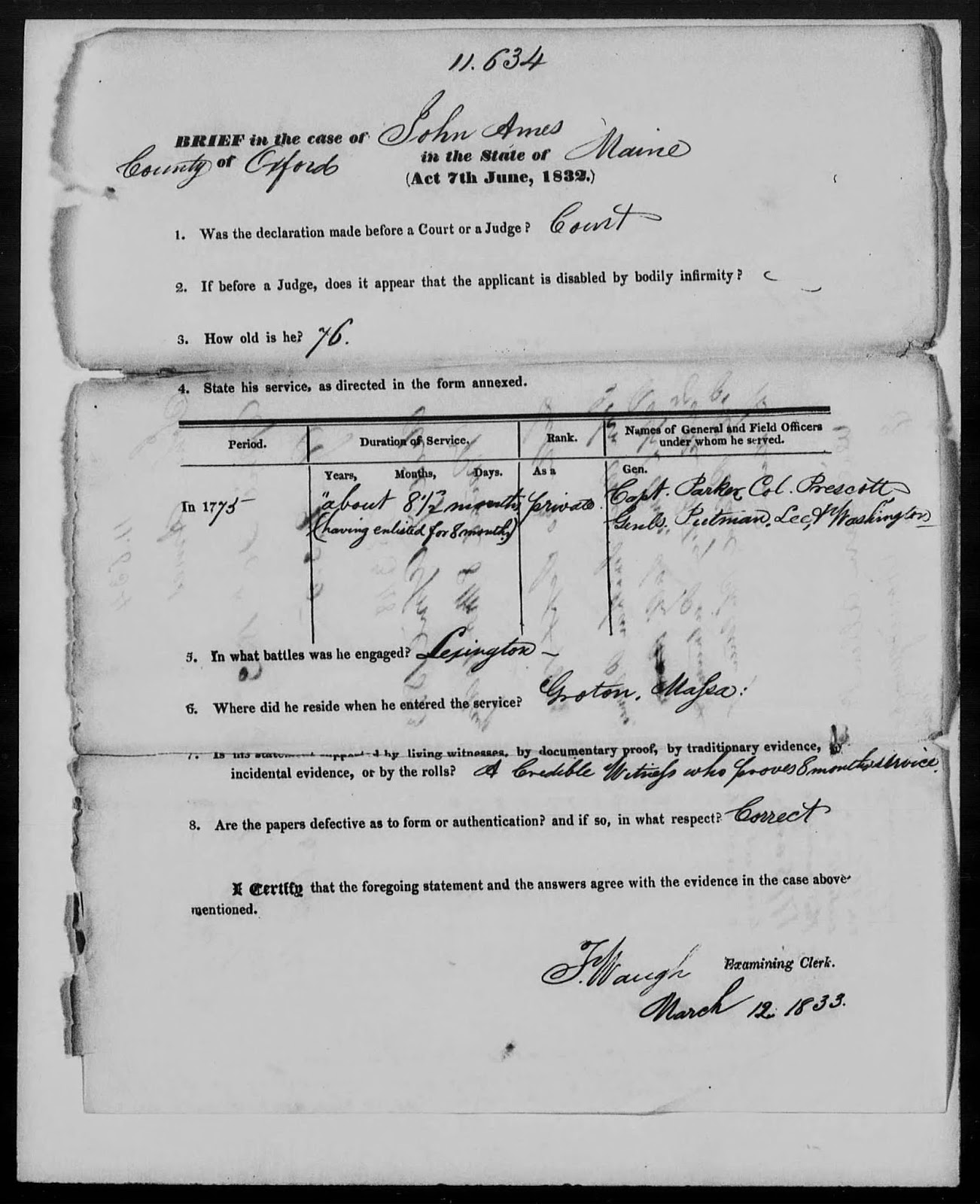 Asa Barrows    My 4x great grandfather
A member of the militia from Middleborough , Ma. (south of
Boston) in the Company of Captain Joshua Benson, in Colonel
Cotton's Regiment, and General William Heath's Brigade for
8 months during the siege of Boston. In December 1776 he
joined a militia Company commanded by Captain Joshua
Perkins and marched to Barrington, R.I. and was stationed
there for 6 weeks. In July 1780 he again enlisted, this time
in a militia company commanded by Captain Perez Churchill
that marched to Tiverton, R.I. . 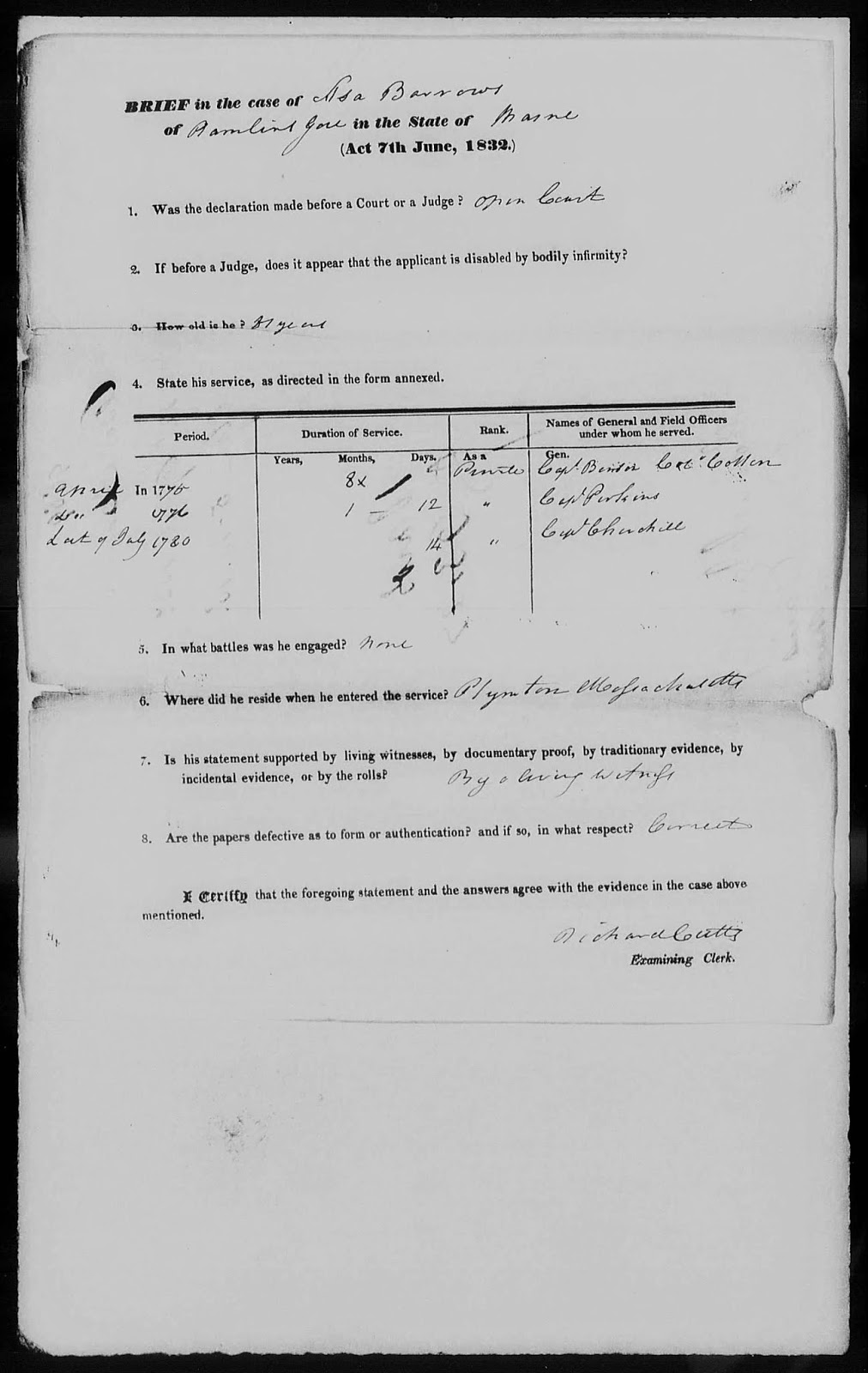 Moses Coburn  My 4x great grandfather
Moses Coburn got into the War late and by reason of being
"hired by a certain class of men in the then town of Dunstable
to go into the Continental Army in the summer of 1781."
When he reached Phillipsburgh in New York he was placed in
Captain Benjamin Pike's Company, in the Regiment of the
Massachusetts line commanded by Lt. Colonel Calvin Smith in
which he served for nearly two years until it was broken up.
He then transferred to the Company of Judah Alden in the
Regiment commanded by Colonel Sprouts until his discharge
in 1783. 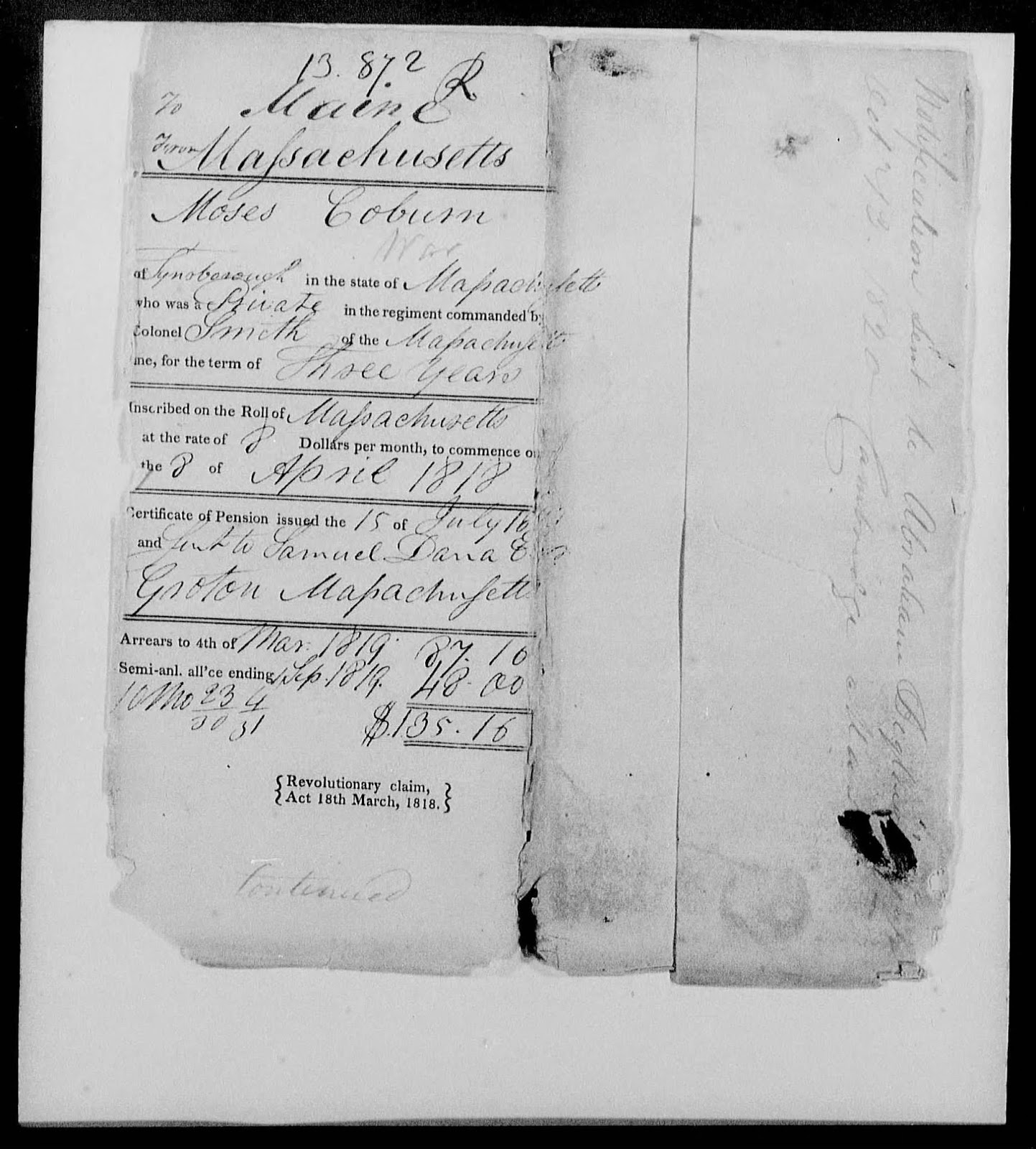 
Amos Hastings   My 5x great grandfather
Amos  responded to the Lexington Alarm as part of
Captain Richard Ayer's Company and Colonel William
Johnson's Regiment. He later served in Captain Timothy
Eaton's Company in Colonel Edward Wigglesworth's Regiment
and was at the taking of the British General Burgoyne at
Ticonderoga.

Elisha Houghton   5x great grandfather
Enlisted at Harvard Ma as a Private in May of 1777 in the
Massachusetts militia and was at the Battles of Bunker Hill
and Stillwater. He then enlisted for three years in the infantry
company commanded by Captain Joshua Brown in Colonel
Timothy Bigelow's 15th Regiment of the Massachusetts line.
and took part in the Battles of Monmouth and Newport and
was at Valley Forge. He twice was promoted to Sergeant and
twice was busted back down to the ranks.

Amos Upton    My 5x great grandfather
Responded to the Lexington Alarm and marched there from
his home in Reading. He later joined the militia company
commanded by Captain Asa Prince as an orderly sergeant
and then enlisted for eight months in the Continental Army
under Colonel Mansfield. He was at the Battle of Bunker Hill.
He was discharged in October of 1775. 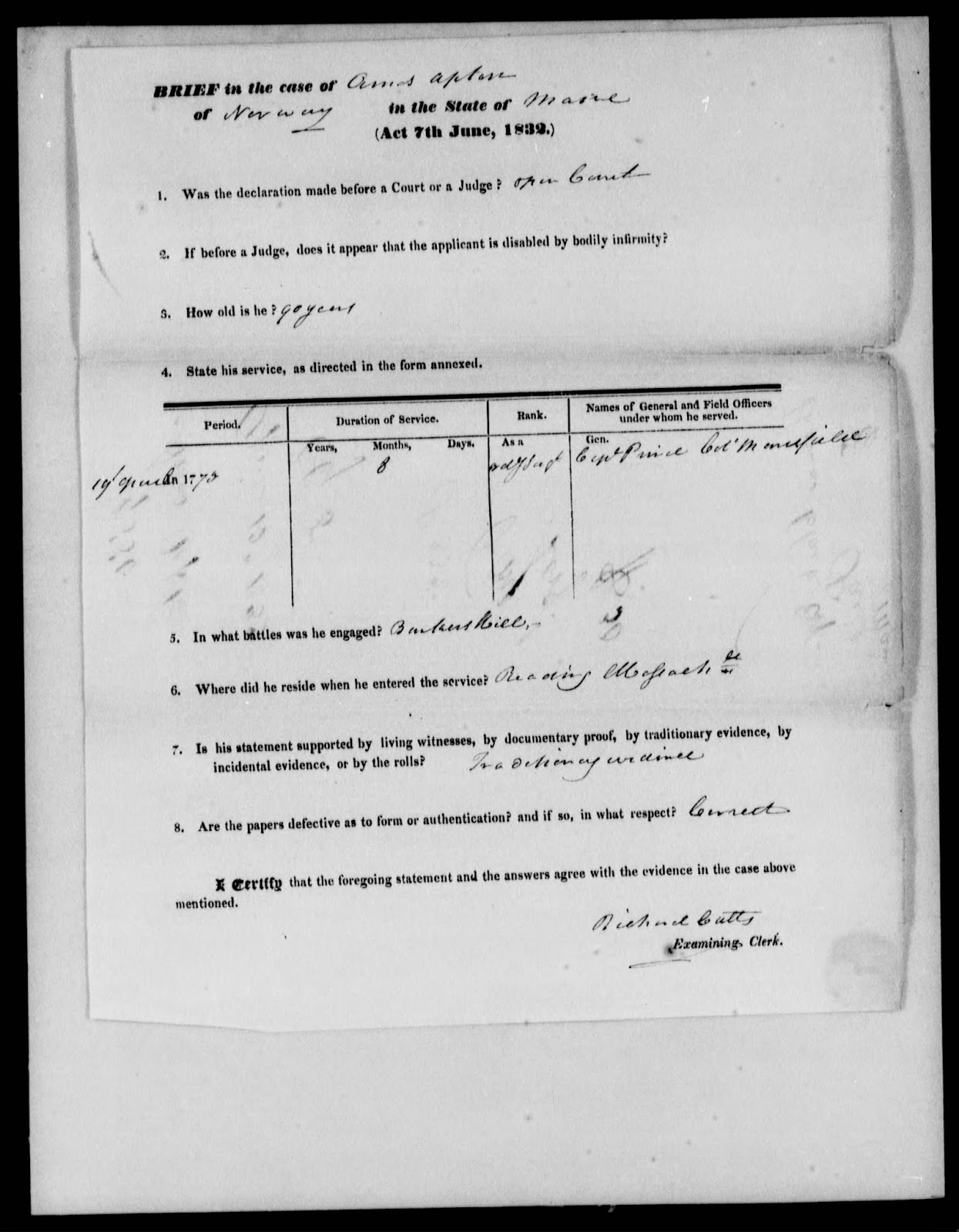 John Griffith  My 5x great grandfather
Enlisted in 1781 as a Matross (he swabbed out the barrel of
the cannons after they fired, or so I've been told) in Captain
William Treadwell's Company in Colonel John Crane's
Artillery Regiment.


Reuben Packard   My 5x great grandfather
A Sergeant in Captain Josiah Hayden's Company in Colonel
Bailey's militia. They marched to Lexington at news of the
Alarm. He also responded several more times as a Minuteman
for a total of nearly 8 months duty.


Besides those direct ancestors, these other relatives fought
in the Revolution:

James Swan, brother in law to Jonathan Barker.
Posted by Bill West at 10:38 AM No comments: