When we got back to Diana and Gary's house we all went inside and
I took a seat on the couch in the parlor. When I'm at home I usually
end up taking an after-dinner nap in the chair in my own parlor so I
was trying not to do the same thing at Diana's place when something
happened that sure woke me up: Diana brought out a birthday cake.
I never had a clue it was coming!


Diana and Gary gave me a handcrafted steak knife from Warther
Cutlery which was made in Dover, Ohio. (I used it last night, by
the way. Boy, is it sharp!) 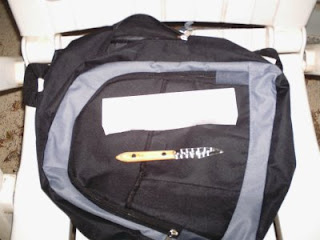 Diana and Gary also gave me the license plate off Pop's Model A along
with the moosehide thongs he'd had to cut through with a hacksaw
to get the plate off the frame. This meant a lot to me because Dad
used to tell us kids how he learned to drive in that car at a pretty
young age on the back roads uphome. The license plate is now on
the top of the bookcase next to my computer desk 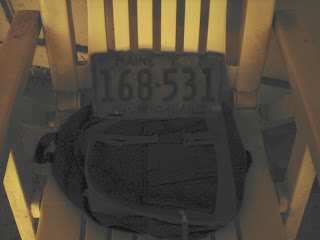 Then Aunt Dot gave me her gift. The birthday card with it contained
a picture of my grandfather in his WW1 uniform. It was the front side
of a postcard which apparently he'd never sent but brought home himself.
That in itself was a great gift, but there was a wrapped gift along with it.
Now having worked in the book business for nearly 19 years now I knew
it was a book of some type and my first thought was that maybe it was
something from Lehman's or maybe the Houghton book that Dot had
shown me photocopied pages of the night before. But it was something
I really hadn't expected. 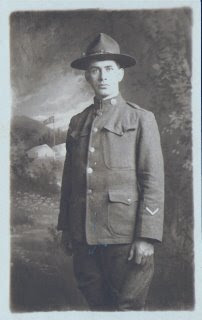 It was the West Family Bible which originally belonged to Arvilla Ames
before she married my ancestor John Cutter West and has the records
of births, deaths, and marriages of their children and grandchildren. I was
completely surprised and honored that she felt I should have something
that had such significance to our family. I'll do my best to keep it safe
until it's time to pass it on to another family member. I can never thank
Aunt Dot enough, as well as the others for their gifts and for giving my
sister Cheryl and I such a great visit. 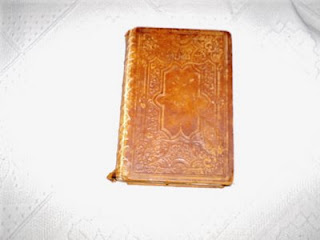 And thank you, Cheryl, for the whole trip. It was a great 60th birthday
gift!

We all posed for a picture before Louise and Steve had to leave. I'm the
big goof in the back with the Red Sox cap. Afterward we had a piece of
cake and coffee while I found out how long this surprise had been in the
works (since last year!) and then it was time for Cheryl and I to leave.
We would be heading on down to Washington D.C. the next day, so
our visit with Dot and her family was coming to an end.

It was a great trip, getting to visit Dot and her family and see a beautiful
area of our country and whenever I look at my birthday gifts I'll think of
about it. This was the third time in three years we'd seen each other (the
other two times were for the weddings of Cheryl's daughter and of her
oldest son) after some years when we hadn't been able to get together
and I'm looking forward to seeing them again. 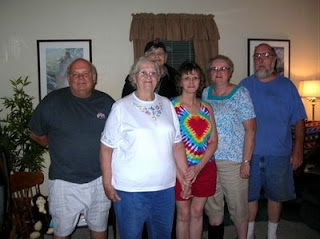 What a great birthday with wonderful birthday presents! I also wanted you to know how much I enjoyed your roadtrip posts. It was fun to read about places that I know so well. I'm glad you enjoyed your trip to "Ohio Country."

Belated Happy Birthday! I'm certain you will cherish the family Bible. I'm glad you had a great trip.