This image from Elisha's pension file is one of my favorite family
documents for the reasons that it was the first time I'd ever
heard of the word "firkin". (cousin Chris Dunham explained it to me).
The preprinted part is in bold face, the filled in parts are italicized. 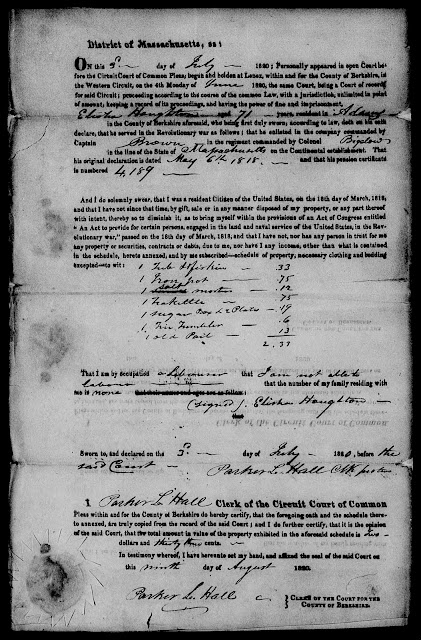 On this day Sixth day of July 1820:Personally appeared in open
Court before the circuit Court of Common Pleas, begun and holden
in Lenox ,within and for County of Berkshire ,in the Western Circuit,
on the 4th Monday of June 1820, the same Court, being a Court
of record for said Circuit; preceeding according to the course of the
common Law, with a jurisdiction, unlimited in point of amount,
kereping a record of its proceedings, and having the power of fine
and imprisonment,

Elisha Houghton aged 71 years, resident in Adams in the County
of Berkshire aforesaid, who being first duly sworn, according to
law,doth on his oath declare, that he served in the revolutionary
war as follows; that he enlisted in the company commanded by
Captain Brown in the regiment commanded by Colonel Bigelow
in the line of the State of Massachusetts on the Continental
establishment. That his original declaration is dated May 6th
1818 and that his pension certificate is numbered 4,189.

And I do solemnly swear, that I was a resident Citizen of the
United States, on the 18th day of March, 1818, and I have not
since that time, by gift, sale or in any manner disposed of my
property, or any part thereof with intent, thereby to diminish it,
as to bring myself within the provisions of an Act of Congress
entitled "An Act to provide for certain persons, engaged in
the land and naval services of the United States, in the
Revolutionary war," passed on the 18th day of March, 1818,
and that I have not, nor has any person in trust for me any
property or securities, contracts, or debts, due to me, nor
have I any income, other than what is contained in the schedule,
hereto  annexed, and by me subscribed-schedule of property,
necessary clothing and bedding excepted-to wit:

That I am by occupation a Labourer that I am not able to labor,
that the number of my family residing with me is none.
(signed) Elisha Houghton

Sworn to, and declared on the Five day of July 1820, before the
said Court
Parker L Hall (illegible) pro tem

I Parker L Hall Clerk of the Circuit Court of Common Pleas
within  and for the County of Berkshire do hereby certify, that the
foregoing oath and the schedule thereto annexed, are truly copied
from the record of said Court; and I do further certify,that it is the
opinion of the said Court, that the total amount in value of the
property exhibited in the aforesaid schedule is two dollars and
thirty three cents.

In testimony whereof, I have hereunto set my hand, and affixed
the seal of said Court on this ninth day of August 1820.

Parker L Hall   }Clerk of the Court for the County of Berkshire."
Posted by Bill West at 3:20 PM