This next part of Elisha Houghton's pension file is an image
of a sheet of paper with handwriting on both sides. This side
is the more legible.The other side is a mess, so I'll discuss that
in the next installment. 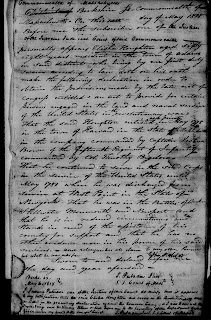 "Commonwealth of Massachusetts
(“District of” crossed out) Berkshires  of Commonwealth of
Massachusetts.On this sixth day of May 1818 Before me the
subscriber one of the Justices of the Supreme Judicial Court
of said Commonwealth personally appears Elisha Houghton
aged sixty eight years resident in the town of Adams in said
district who being by me first duly sworn according to law
doth on his oath make the following declaration in order to
obtain the provisions made by the late act of  congress entitled
`an act to provide for certain persons engaged in the land
and naval services of the  United States in the revolutionary war
` that the said Houghton enlisted as a private in May 1778 in
the town of Harvard in the state of Massachusetts in the
company commanded by Captain Joshua Brown of the fifteenth
Regiment of commanded by Col. Timothy Bigelow.That he
continued in the service of the United States until May 1781
when he was discharged from service at West Point in the
State of Newyork. That he was in the Battles of  Bunker Hill
Stillwater Monmouth and Newport and that he is in reduced
circumstances and stands in need of the assistance of his
country for support and that he has no other evidence now in
his possession of his said services and relinquishes all claim
to any other Pension but what he now asks for.


I Samuel Putnam one of the Justices of the aforesaid Court do
certify that it does appear to my satisfaction that the said Elisha
Houghton did serve in the Revolutionary war as stated in the
preceding declaration against the Common enemy and I now
transmit it the preceding and testimony taken here before me to
the Secretary of the Department of War. Given under my hand
at said Court.