This is the beginning of my transcription of the images of the Revolutionary
War Pension file of my ancestor Elisha Houghton. The file covers his original
filing in his native state of Massachusetts, and then his application to have
his pension transferred to the state of Vermont. THe pages are a mixture of
preprinted text and handwritten additions, so I've used a system I've used
previously by boldfacing the preprinted words  and italicizing the added
parts. Words or phrases that I couldn't decipher are in parentheses.


The second image is of the beginning of Elisha's  paperwork. It's folded
in thirds, with no writing on the left hand panel. The middle is a preprinted
form.The file number 3925 is written above the printed word INVALID. To
the left of that is the abbreviation Revy for Revolutionary. The rest reads 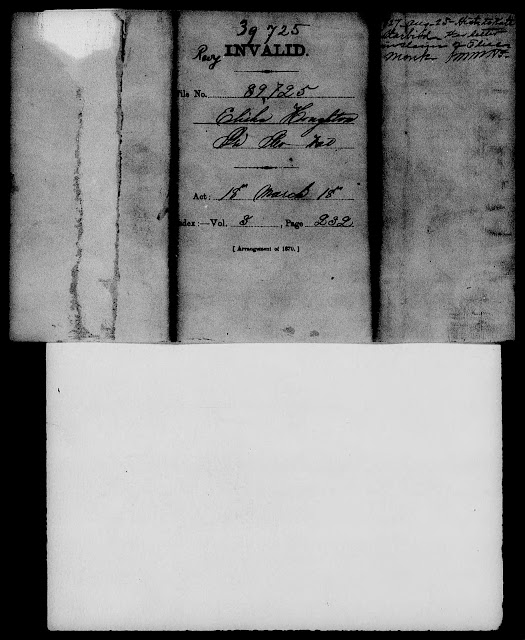 On the right hand fold  someone wrote:

This last part refers to a researcher named Kate Starbird. Apparently she'd
written a letter inquiring about the records of Elisha Houghton and Elias
Monk. A copy of a  typewritten reply to her on Elisha's record is included
in Elisha's record. It is dated August 25th, 1927.