The next image is of the other side of Elisha's affidavit. It appears the piece
of paper was folded in half twice lengthways which created four panels. There
are some words I couldn't read and I note them in parentheses. Likewise,
there are two words I'm not sure I've read correctly so I've used a (?) to
show that. 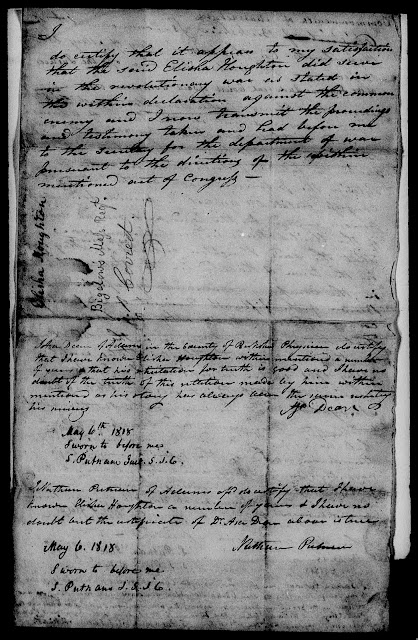 The text above the first fold appears to be an earlier version of Justice
Samuel Putnam's certification of Elisha's testimony. Apparently he decided to
write it on the bottom of the first side instead. He didn't sign this version:

The second panel served as a cover to the document when it was folded
up. As such the writing is at a right angle to the rest of the page:

The third and fourth panels are statements by two witnesses as to the
character of Elisha Houghton and the truth of his story.

"I Nathan Putnam of Adams also do certify that I have
known Elisha Houghton a number of years & I have no
doubt but the certificate of Dr. Asa Dean above is true
Nathan Putnam
May 6.  1818
Sworn to before me
S. Putnam J.S.J.C."
Posted by Bill West at 3:12 PM