Sometime between 1820 and 1823 my ancestor Elisha Houghton moved to
Vermont from Western Massachusetts. So far I haven't been able to find out
why he went there instead of to Oxford County Maine where his children
now lived. Perhaps there were relatives or old friends living in Vermont.
In any case when he left Massachusetts he had to apply to have his pension
payments transferred to his new place of residence. The remaining images
in Elisha's file deal with that transfer. 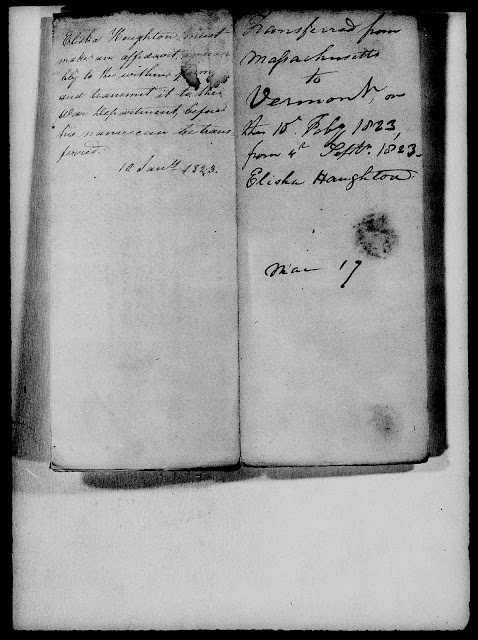 The first image is a folded sheet of paper. On the left hand side is a hand-
written note:

"Elisha Houghton must make a new affidavit agreeably to the within form
and transmit it to the War Department before his name can be transferred.
10 Jan 1823"

Next is the actual transfer application. It's another preprinted form with
information filled "in the blanks" which I've designated with italicized print: 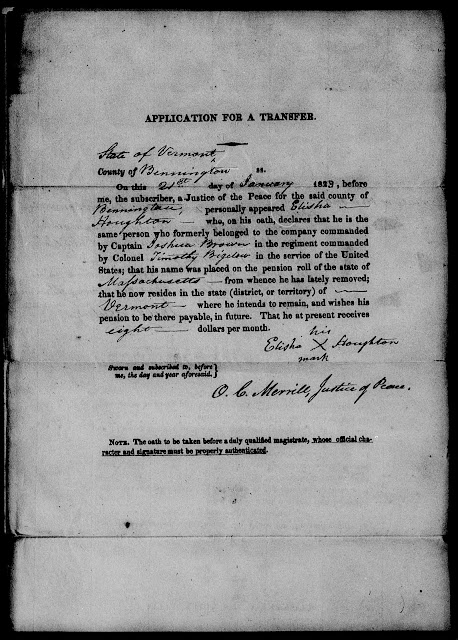 APPLICATION FOR A TRANSFER
____________________
"State of Vermont
County of Bennington ss.
On this 21st day of January 1823, before me, the subscriber, a Justice of the
Peace for the said county of Bennington, personally appeared Elisha Houghton
who, on his oath, declares that he is the same person who formerly belonged
to the company commanded by Captain Joshua Brown in the regiment
commanded by Colonel Timothy Bigelow in the service of the United States;
that his name was placed on the pensions roll of the state of  Massachusetts
from whence he has lately removed; that he now resides in the state
(district, or territory) of Vermont where he intends to remain, and wishes his
pension to be there payable, in the future. That at present receives eight
dollars per month.
his
Elisha   X  Houghton
mark
Sworn and subscribed to, before
me. the day and year aforesaid     }                  O.C. Merrill,  Justice of Peace.
NOTE. The oath to be taken before a duly qualified magistrate, whose
official character and signature must be properly authenticated."

Then on the back is a handwritten note: 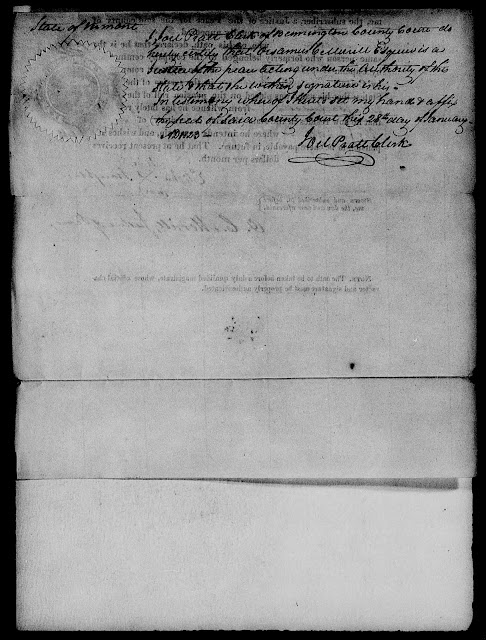 "State of Vermont
I, Joel Pratt Clerk of Bennington County Court do hereby certify  that Orsamus
C Merrill Esquire is a Justice of the peace acting  under the Authority of this
State & that the within signature is his.
In testimony whereof I hereto set my hand & affix the seal of said county
court this 28th day of January AD1823-
Joel Pratt Clerk"

Next we'll see if Elisha's transfer  was allowed and the amount of his pension.
Posted by Bill West at 6:52 PM