In the last entry in this series about Elisha Houghton's Revolutionary War
Pension file, I posted the transcription of Elisha's request to be transferred
from the Massachusetts Veterans Roll to that of Vermont where he had
relocated.He made the request in January of 1823 and it was granted by
September of the same year. The final image from his file in a combination
of printed and handwritten information from both 1818, the year of the
original pension filing, and 1823 when the transfer was made: 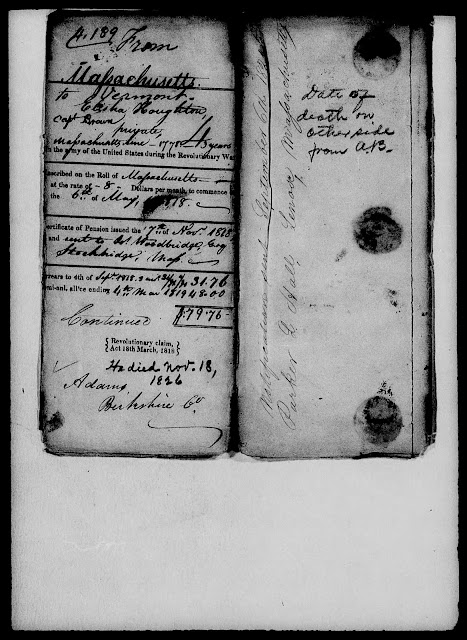 On the right hand side of the sheet  are three oval shapes that probably were
left by wax seals. There are also two handwritten items. One is written along
the left hand side of the fold the length of the paper from top to bottom and
reads:

To the right of that is another notation:

"Date of death on
other side
from AB."

The added notes are a little confusing. The "He died Nov 1826"  was added
later but because of where it was placed it makes it appear Elisha died in
Adams, Berkshire County, Ma. when he actually died in Vermont. Also there
are some figures just to the left of sum of 31.76 that I couldn't decipher.

So my 5x great grandfather collected $96 dollars a year for eight years from
1818 until his death at age eighty in Vermont in 1826. Why he had moved to
Vermont, and who he was lving with. is something I need to investigate further.
Posted by Bill West at 9:21 PM