My 4x great grandmother Betsey (Wiley) Hastings filed her affidavit to collect
a pension in October of 1838. Apparently her statement, and that of Amos
Gage were not sufficient evidence to qualify her for it. But she didn't give
up, or more likely one of her children didn't. Further documentation was
submitted, the first being proof of her marriage to my ancestor Amos
Hastings: 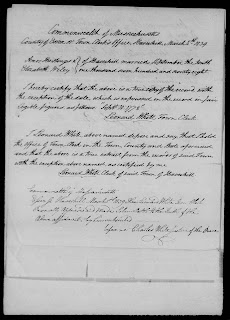 "Commonweatlh of Massachusetts
County of Essex SS: Town Clerk's Office, Haverhill. March 4th, 1839
Amos Hastings & Elizabeth Wiley} of Haverhill married September the tenth
one thousand seven hundred and seventy eight.
I hereby certify that the above is a true copy of the record with
the exception of the date,  which is expressed on the record in a fair
legible figures, as follows: "Sept:10:1778"
Leonard White Town Clerk

I Leonard White, above named depose and say, that I hold
the Office of Town Clerk in the Town, County, and State aforesaid,
and that the above is a true extract from the records of said Town
with the exception above named, as certified by me.
Leonard White Clerk of said Town of Haverhill.

The reason I think one or more of Betsey Hastings' children were involved in
the process is a simple one: Betsey was eighty two years old when she made
her affidavit in 1838. That was well past the average lifespan in the early 19th
century. Someone  would have had to either make the trip to her former
hometown of Haverhill, Ma. or carry out the correspondence with the Town
Clerk. But Betsey didn't sign her name to her affidavit, she "made her mark"
with an X. So I don't believe she could write. Either her children obtained the
marriage record or a lawyer was hired to do it for her.

In either case, things didn't go off as smoothly as the family might have hoped
as we shall see.
Posted by Bill West at 11:20 PM