AFFIDAVITS OF DEATH FOR AMOS AND REBECCA HASTINGS

The shortest document I found in the Maine, Oxford County, Probate
Estate Files, 1805-1915 was quite puzzling at first. The cover of the file
simply says 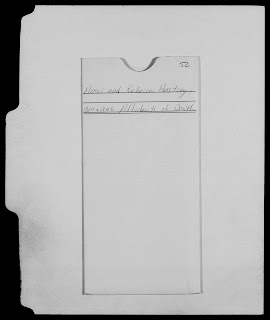 
There's no will, no probate records at all, simply two statements, one
from a Moses Mason, the other from an Abigail Hastings. Hers reads:


I Abigail Hastings of Bethel, County of Oxford,
having been sworn do testify and say
I was present at the  of Amos
Hastings, He died in Bethel on the
28th day of July 1829 & the name (?) of his
death made as about the time it took
place now remains upon the Bible of
the family and which I have now examined
and which is recorded as having taken
place July 28, 1829.
Rebecca Hastings died at Bethel the
twelveth day of May 1846.
Abigail Hastings

Oxford Co. Sept 16 1851 Abigail Hastings made
oath as to the truth of the above statement by
this subscribed(?) this day
Before me
D. R. Hastings } Justice of the Peace. 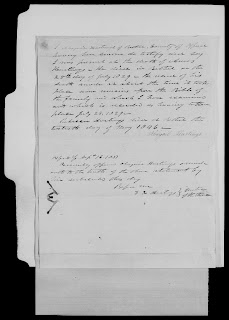 I confess I haven't done much research on my Hastings ancestors siblings.
Amos Hastings and his wife Elizabeth(Wiley) Hastings were my 4x great
grandparents. For some reason Elizabeth is often listed as Rebecca, maybe
because her mother's name was also Eliabeth. Using Rebecca might have
been the way the family differentiated between mother and daughter.
I know of their daughter Huldah, my 3x great grandmother, and their son
John because I've run across his name in Amos' Revolutionary War Veteran
Pension File, but so far I haven't researched the rest of their eleven children.
So I wasn't sure how Abigail Hastings was related to them, nor, for that
matter, who D.R. Hastings was either.

it turns out Abigail was Amos and Elizabeth's daughter in law, Abigail (Straw)
Hastings, the wife of John  Hastings, and D.R.Hastings was David Robinson
Hastings, John & Abigail's son, who had graduated from Bowdoin College in
1844 and was studying law with a Bethel, Maine law firm.

So now I knew who had filed the affidavit of death. Now I needed to figure out
the why,
Posted by Bill West at 3:17 AM