AFFIDAVITS OF DEATH FOR AMOS AND REBECCA HASTINGS PT3

As I said in the previous post about the Affidavits of Death for Amos Hastings
and his wife Rebecca (also known as Eliabeth or Betsey), I asked my genealogy
friends on Facebook what the purpose of such a document might be. It was
after that when I discovered that Abigail Hastings who filed the Affidavit was
the wife of Amos and Elizabeth's son John Hastings. That reminded me of
something in another file

Waaaaaaay back in July of 2007 I'd read on Randy Seaver's Genea-Musings
blog that the Footnote.com(now Fold3.com) website was offering free
access to it's Revolutionary War collection for seven days to celebrate
Independence Day. So I checked it out and found the records for many of
my ancestors, most of whose particpation in the war I hadn't known about.
Among those documents were Pension Files, including one for my 4x great
grandfather Amos Hastings.

But that file differed from most of the other Pension Files I downloaded
from Footnote.com in that it wasn't Amos himself applying for the Pension,
it was first his widow Elizabeth and then youngest son John. And this image
of a document from the Oxford County Probate Court is the last one in the file.
You can see the form has been altered with some words and one phrase
("was a Pensioner of the United States, and that he ..")crossed out. 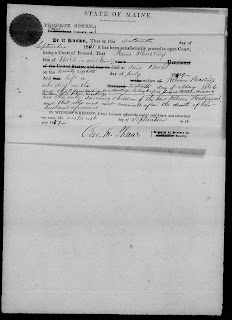 "STATE OF MAINE
PROBATE COURT
Oxford County,ss.
Be it Known, That on this sixteenth day of
September 1851 it has been satisfactorily proven in open Court,
being a Court of Record, That Amos Hastings
late of Bethel in said County, died at said Bethel
on the twenty eighth day of July 1829.-
And left a widow Rebecca Hastings
who died on the twelveth day of May 1846
and that Amos Hastings, Jonas Hastings, Betsey Russell, Lucinda
Fletcher, Huldah Barker and John Hastings
are the only surviving children of the said Rebecca Hastings
an that she was not married after the death of her
husband aforesaid.
In Witness Whereof, I have hereunto affixed the seal of said Court,
and subscribed my name this sixteenth day of September in the
year 1851-
Geo. K Shaw
Register of Probate for Oxford County."

Notice the date: 16 September 1851. That's the same date as the day on
which the Affidavits of Death were filed in the same Probate Court.
It's my belief that the Affidavits of Death were filed to provide John
Hastings with documentation of his parents' deaths for his claim on the
Revolutionary War Pension. I don't believe John was successful. While
a surviving minor age child might receive the Pension for a deceased
father, John was born in 1796 and was 55 years old at the time all this
took place.

I'll go more into that Pension file next.
Posted by Bill West at 2:57 AM