My 4x great grandfather Amos Hastings never applied for a Revolutionary
War pension before he passed away in 1829, probably for the simple
reason that he wasn't in in any financial difficulties. But nine years later
his widow, Elizabeth (Wiley) Hastings, known as Betsey, did look to
take advantage of a new Pension act: 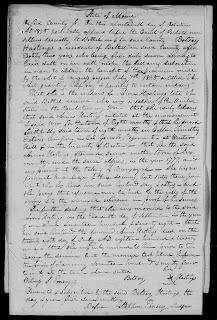 State of Maine
Oxford County SS. On this nineteenth day of October
AD 1838 personally appeared before the Court of Probate
now sitting specially at Bethel in & for said County, Betsey
Hastings, a resident of Bethel in said County, aged
eighty two years, who being first duly sworn,acording(?) to
law, doth on her oath, make the following declaration
in order to obtain the benefit of the provision made
by the Act of congress passed July 7th 1838 entitled "An
Act granting help(?) pay & pensions to certain widows."

That she is the widow of Amos Hastings late of
said Bethel deceased who was a soldier of the United
States in the Revolutionary War. that she verily believes
that said Amos Hastings enlisted at the commencement
of said War for the term of eight months in Captain Timothy
Eaton's Company in  Col.Gerrish's Regiment at Winter's
Hill& in the vicinity of Boston- that he the said
Amos Hastings afterward served another term of six
months-under the same officers, in the year 1777, and
was present at the taking of Burgoyne-she has no
personal knowledge of these services, but states them from
what she has heard her said husband say & others- and
she prays that reference may be made to the rolls of the
army & to the annexed evidence in proof of his services.

Betsey sent along a few other documents and I'll discuss those next.
Posted by Bill West at 12:55 AM