Betsey Hastings submitted a few more pieces of evidence along
with her statement. The first of them was this statement by Daniel
Gage, himself a veteran of the Revolutionary War: 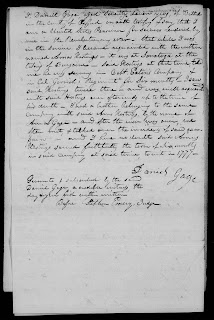 "I, Daniel Gage, aged seventy seven years, of Bethel
in the County of Oxford on oath testify & say that I
am a United States Pensioner for services rendered by
me in the Revolutuinary War- that while I was
in the Service I became acquainted with the said
named Amost Hastings-it was at Saratoga at the
taking of Burgoyne-said Hastings at tnhat time told
me he was serving in Capt. Eaton's Company &
in Col. Gerrish's Regiment for six months- I saw
said Hastings twice there- and was well acquainted
with said Hastings ever afterwards up to the time of
his death-I had a brother belonging to the same
Company with said Amos Hastings, by the name of
Amos Gage- and after the war was over, we
often met and talked over the incidents of said cam-
pain- and I have no doubts said Amos
Hastings served faithfully the term of six months
in said company at said time, to wit in 1777-
Daniel Gage.

I'll discuss the other documentation Betsey produced in the
next post.
Posted by Bill West at 1:57 AM