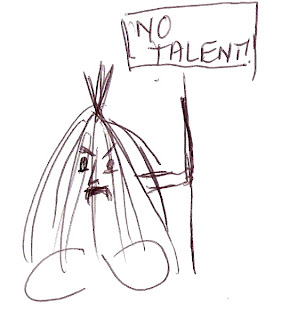 I missed the deadline for this round of the Carnival of Genealogy
but I thought I’d weigh in here anyway on who has the creative
gene in my family.

As you can see from the accompanying picture, I have little or no
artistic talent. I’ve been drawing those troll things for years now
mostly because they look a heck of a lot better than stick figures.
Musically, I used to play a mean “Hot Cross Buns” and “Do You
Know the Muffin Man?” on a Fluteaphone but that’s fifty years
ago, people and I’m pretty sure my technique and lip have gone
downhill from the second grade.

My parents had talent. Dad was good with building things and
helped wire a house when he was still in his teens. He built a
playroom in the cellar and an extra room out of a porch at the
house on Bicknell Hill here in Abington when we first moved in
to town. And he had a musical talent too: he could play “On the
Isle of Capri” and “Don’t Sit Under the Apple Tree” on any
harmonica we kids happened to have handy.

Mom, as I said elswhere, had a good singing voice and enjoyed
a stint in a VFW Auxiliary chorus called “Harmony in Blue”. I can
recall her singing along to “Ave Maria” during Mass. I can also
remember her singing along to Rusty Warren’s “Roll Me Over in
the Clover” at parties where they played the album after we kids
were sent to bed as if we couldn't hear it being played!
Of us three kids, Phil and Cheryl inherited the musical gene. Phil
is seventeen years younger than me and twelve years younger
than Cheryl and came along during my folks’ active VFW life.
Watching all those parades got him interested in drum and bugle
corps and heplayed bass drum in several different local corps
growing up. He would have liked to make the snare line but being
one of taller kids for his age doomed him to the bass.

Cheryl is the most talented of the three of us. She can draw. She
played guitar and piano as a kid and one Christmas I bought her
a dulcimer at a local craft show. I don’t think she ever did much
with it though. She passed on the music bug to her own kids:
Paul plays drums, Michael keyboards, and I believe Sarah used to
play guitar.But not as a band! There can be only one Partridge
Family!

But perhaps Cheryl’s best display of holding the family creative
title is that she’s a middle school English teacher and in my
opinion that’s a profession that requires a LOT of creativity.
As for the next generation, Phil’s youngest Matt requested and
got an electric guitar for Christmas (albeit not a full sized one but
one suitable for a young kid) and his older brother PJ likes to
draw. So there’s a chance we might yet produce a composer or
artist in our branch of the West family.

Or at least one more that can draw a heck of a lot better than I
can!
Posted by Bill West at 12:50 AM

You have it all wrong. You are your family's talented person.... a wonderful researcher and writer!

Thanks for the compliment Janice but I think I really have to keep
working at it to keep up with the likes of you, Randy, Jasia, Chris
and Tim, just to name a few of the
many talented genealogy bloggers out there!

Love your troll. So original, and yes, more creative than a stick figure.

I really think you should use him as your alter ego.

Creativity is in the eye of the beholder and I behold you to be very creative.

Thanks for the kind words!

I'm still a bit shocked people think that picture is any good though!
:)