A "T CHART" FOR CALEB COBURN

The Genealogists in Second Life have started a Just Genealogy Book Club  and
we're working through  Val D. Greenwood's  The Researcher's Guide to
American Gednealogy, 3rd Edition (Genealogical Publishing Co. 2000) and I'm
finding it very informative. This past week we covered the chapters on
"Analyzing Pedigree and the Place" and "Evaluation of Evidence"(chapters
4 & 5). In the section on Pedigree Analysis Mr Greenwood suggested using
what he calls a "Tchart". Basically you draw a line down the center of the
piece of paper and one side label "What do I already know" and "What does
this suggest?"  I decided I'd like to try that out.

I chose 5x greatgrandfather Caleb Coburn as my guinea pig.(Forgive me,
Grandpa Caleb!). Then I wasted an hour or so hunting around for a two column
template I could use on one of my word processor programs. When that
failed, I tried making one from scratch which wasted more time. Finally I gave
up and went back to basics, pen and paper. So be warned: this isn't the
prettiest graphic you'll ever see: 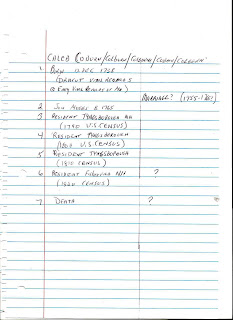 I chose Caleb because I hadn't found a death date for him nor have I ever found
the name of his wife. I printed his name at the top of the page and included all
the various spellings I've encountered for Coburn, and then started listing on the
left side of the page what I already knew : his birth in Dracut, Ma on 12 Dec 1738,
the birth of his son Moses in Tyngsborough,  Ma in 1765  and where he was
enumerated on the 1790, 1800, and 1810 Federal Census. There was also a
Caleb Coburn enumerated on the 1820 Fishersfield Nh Federal Census but I
had questions about that one.(which may account for my mangling the name of the
town in my list)

And of course, he died,  (Unless Caleb was an immortal vampire or alien)  but
I'd found no date or place for that as of yet.

So, what did that all this suggest? As you can see, initally, not a heck of lot. But
we'll get to that next post,
Posted by Bill West at 3:10 AM

This exercise is a great suggestion. I love Val Greenwood's book. I think much of genealogy is organizing information so that we can see the not so obvious. There is so much information that can be gleaned from reading between the lines. This exercise really helps with that. Thanks for taking the time to go through the exercise and share it with us. I am struggling with a project sort of in the same time period and I need to use the same line of thinking.

I've seen the bait, I've swallowed the hook, now we wait for the follow-up post.
I'm intrigued about this research aid. I could Google it, but for now, I'm patient :)

This is perfect for me today since I decided to analyze the data on my maternal grandfather today and decide what to do next to fill in the missing links. I think I will skip the part where I look for a templet and start off with paper and pen.

Great post. You inspired me to create a Word template for just this sort of work. I'm happy to share if anyone is interested. Just drop me an email. Any feedback is certainly appreciated. Will make it available for general download as soon as I've had some time to work out some kinks.