I received a series of emails from my West cousin Yvonne out in Washington
state tonight. She's my 3rd cousin once removed, descended from my 3x
greatgranduncle Leonidas West who decided to take his last name literally
and moved west. Anyway, Yvonne has been going through some of her
grandmother's things, among which was a pocketbook which contained
handwritten records of family births, deaths, and marriages. These are
going to be very helpful in filling in some information on my tree, but one
sheet in particular, the first, held a surprise. 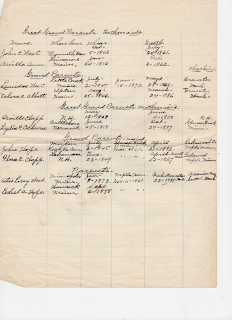 Yvonne's grandmother was Ethel Alvina Hope. Up until now I hadn't done
an research on her because I've been wrapped up in my own direct and
collateral lines. But according to this list, her grandparents were Orville
Clapp and Lydia Colburn. Now I have Colburns/Coburns on my Dad's
maternal line; one of his great grandmothers had been Elizabeth Coburn
who'd married Nathaniel S. Barker in Oxford County Me. and who was
descended from Edward Colborne and Hannah Rolfe of Ipswich, Ma.
I noticed on Yvonne's image that this Lydia Colburn was born in Vermont
so she came from the right neck of the woods, as they say. So was she also
descended from Edward Colborne?

Long story short: yes, she was. My line is from Edward Colborne's son Joseph.
Lydia Colburn(and cousin Yvonne) are descendants of another son, Robert, or
so a preliminary search indicates. By now I'm used to finding connections from
one family line to another in my Dad's family tree. New England is a small place
and there was a small population in Western Maine for many years so it is to be
expected that there would be a lot of instances of marriage between families.

What makes this one fun to discover is that this link between the two sides of
my Dad's family happened not in Maine but out in Spencer Brook, Minnesota.
Orville Clapp was from Canada, and Lydia Colburn from Vermont. But many
New Englanders, like Leonidas West, had migrated out to Minnesota to work
either as farmers or as lumbermen.

I'm wonder where Ethel Alvinia Hope got her information. Judging by the headings
on the other pages(Register of Births, Register of Deaths, Register of Marriages) I'm
guessing she copied it from family bibles. I'm certainly glad that Yvonne discovered
these papers, because now we know we  have a double cousin connection!
Posted by Bill West at 1:38 AM