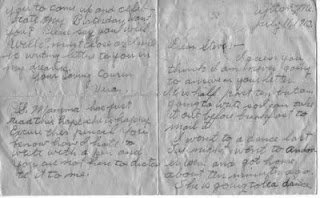 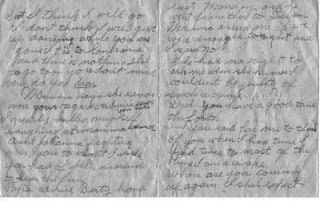 One of the items on the two cds cousin Lewis Wuori recently sent me
is a letter written by Vera Olive Morse in July of 1913. Steve is Stevens
Morse Abbott. Steve and Vera were second cousins,both great
grandchildren of Philip Richardson and Esther Laughton. The letter is
written book style on a folded piece of paper, so Image 1 has the last
and first page of the letter while Image 2 is pages two and three from the
inside.


Vera would have been 16 years old at the time and even though it's nearly
a century since she wrote it, it sounds very much like something a teen
of today might write to her boyfriend.:

I guess you think I am never going to answear your letter.
It is half past ten but am going to write so I can take it before breakfast
to mail it.

I went to a dance last Tue. night, went to Andover Wen. and got home
about ten minutes ago. She is going to be a dance Sat. I think I will go.
I don't think I will give up dancing while you are gone.It is to lonesome
and there is and there is nothing else to go too you don't mind do you
dear.

Mamma says she sends me your regards or I mean sends you hers. I
nearly killed myself laughing at Mamma and Aunt Johanna fighting
over you to night I wish you had of been around to hear the fun.
Papa carried Berty home last Monday and he went from there to Lisbon.
Mamma asked me tonight if we were engaged and I said no.

She had no right to ask me when she knows I wouldn't be guilty of such
a crime.

Did you have a good time on the forth.

You said for me to think of you when you had time,. I find time to most
of the time I am awake.

When are you coming up again. I shall expect you to come up and celebrate
my Birthday won't you? Please say you will.

Well I must close or I will be writing letters to you in my dreams.
Your loving Cousin
Vera

P.S. Mamma has read this hope she is happy
Excuse this pencil you know how I write with a pen  and you are not
here to dictate it to me.
Posted by Bill West at 11:14 PM

Did they get married?