Fellow geneablogger Amy Johnson Crow of No Story Too Small has issued the 52
Ancestors in 52 Weeks Challenge. Basically, we have to post something every week
on a different ancestor, whether a story, picture, or research problem.  This week's
subject is my 6x great grandfather Ephraim Griffith.

The Griffith's are one of those families for which I wish I had more information. It's
one of those cases where I know a lot about Ephraim's maternal line, and a lot about
his West descendants, but not as much about the Griffiths themselves. Ephraim's parents
were Samuel Griffith and Eleanor Estey. His great grandmother was Mary Estey(Eastey) who was hung as a witch at Salem in 1692. The Estey family moved out of Essex County
afterwards and Mary's son Joshua settled in Rochester in Plymouth County where Eleanor
was born in 1704. She married Samuel Griffith(Griffeth) on 24Sep 1723 in Rochester.

Ephraim Griffith's birth is given as July 25 1733 in the Rochester "Tan Book" of the town records. They also list his marriage to Mary Ellis of Wareham as occurring on Feb.10 1757 in Wareham, Ma. Among their children was my 5x great grandfather John Griffith.
At some point in the late 1700's the family moved to Plympton Ma. in a part of town which later became the town of Carver.

The rest of what I think I know about Ephraim is a bit tentative because there may have been other men living in the same area named Ephraim Griffith. There was one other
that I am certain of, that being Ephraim's son Ephraim Junior.  What I've pieced together
is this:

-In his History of the Town of Carver, Massachusetts: Historical Review, 1637-1910, author Henry S. Griffith says Ephraim had a farm on Popes Point Rd. (p61)

-During the Revolution  a Ephraim Griffith was in a company commanded by Capt. Bridgham
(p103)

Ephraim's death date in the town records and on his gravestone is given as just
December, 1823. The only hint I have of where Mary Griffith died is that on Ephraim's headstone it says she died in Woodstock, Vt. 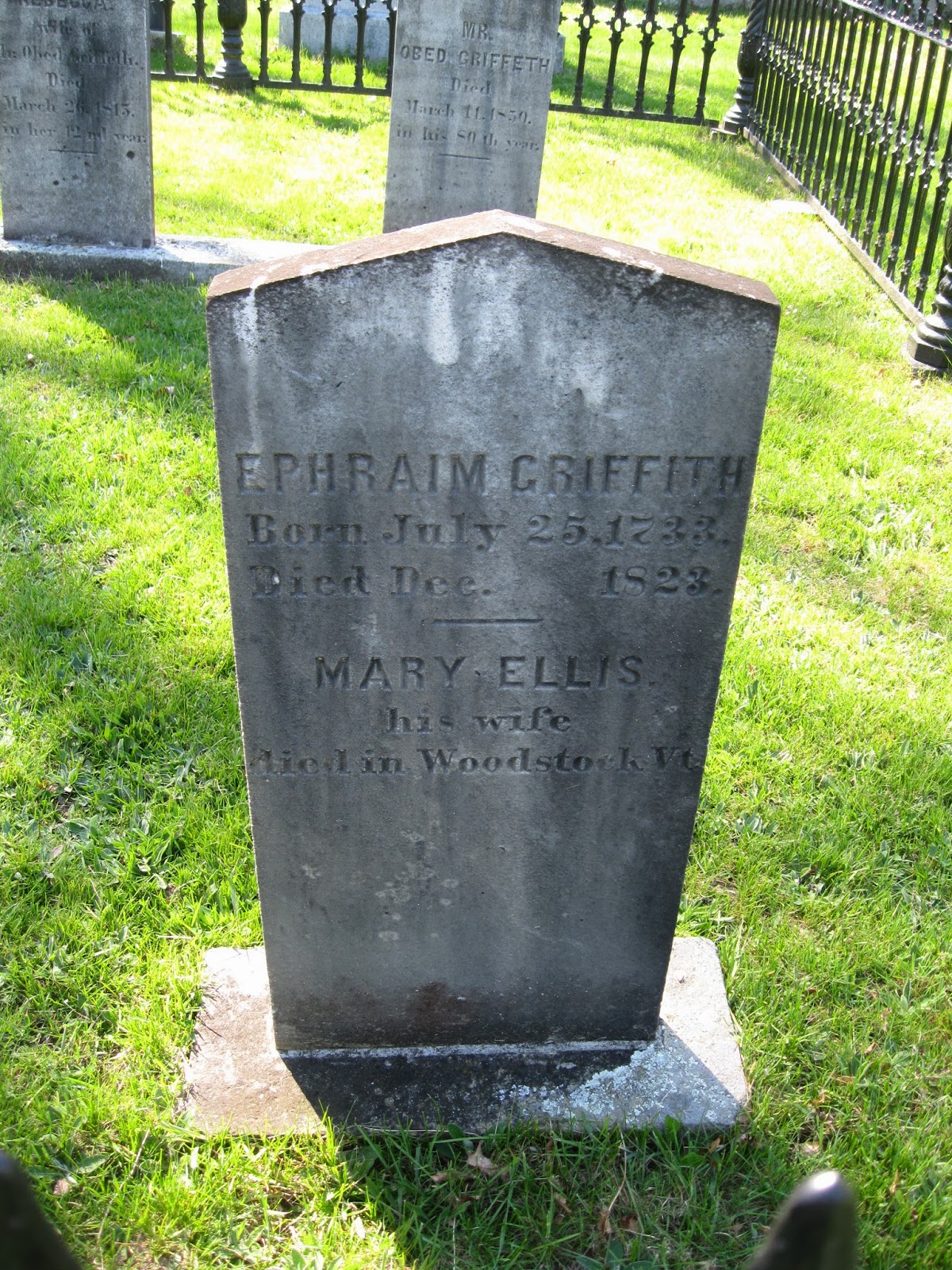 Of course the question is are all those for Ephraim Sr. or are some Ephraim Jr's?

I've also begun downloading  land records from Plymouth County at FamilySearch and
hope to learn more from them.

It seems when I am researching one of these 52 weeks posts I discover something I
hadn't know previously about my family. In this case, I found an article by Gary Boyd Roberts on the American Ancestors website which talks about how basbeball legend
Ty Cobb was descended from Ephraim Griffith's brother, Daniel!
Posted by Bill West at 1:53 AM