THE ESTATE OF JOSEPH ELLENWOOD PT4 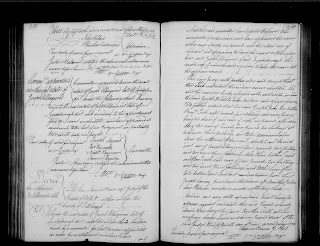 My ancestor Joseph Ellingwood's estate was finally settled a little over a year after his
death. By this time there was a new new Registrar and the handwriting changed. It's
a very florid artistic hand. I wish I could reproduce the over-sized brackets here but I
can't. I'll have some information on the heirs in my next post.

Decree for settlement  Jos. Ellenwood estate]
The hon. Samuel Dana esq. Judge of the Probate of Wills withing and for the
County of Hillsborough

Wherein the real estate of Joseph Ellingwood late of Lyndeborough decd., except
the widows third, has been viewed by a commttee for that purpose appointed in
order for a settlement acording to law;

The said Judge doth further order and decree that the said real estate, the widows
dower excepted, be and the same is hereby assigned unto, and vested in him
the said Joseph to hold to him,  his heirs and assign forever. It is further ordered
that the said Joseph pay his brother  Benjn Tuck eight pounds, five shiilings and
nice pence being his share of said sum of sixty six pounds after deducting the sum
of Twenty four pounds, ten shillings and two pence three farthings due to the
Adminsistrator upon the settlement of their acct.; also to Danl Herrick Junr son of
Sarah Ellingwood four pounds, two shillings and ten pence  three farthings. Also
to his brother Jacob and Danl. each, said sum of four pounds, two shillings and
ten pence three farthings, and to heirs of his late brother Ebenr. said  last sum
mentioned from this. Jospeh having purchased the shares of brother, John, and
Return, no order is made respecting them.~

And in case any debts unpaid shall hereafter appears against said estate, the said
Joseph is hereby ordered to discharge the same, together with all the necessary
charges. Given under my hand & seal of the said Judge, this fifteenth day of June,
anno Domini 1790.
Samuel Dana J. Prob.
Inventory of record from original
Att: Wm Gordon Regr.

To be continued.
Posted by Bill West at 9:43 PM