THE ESTATE OF JOSEPH ELLENWOOD PT2 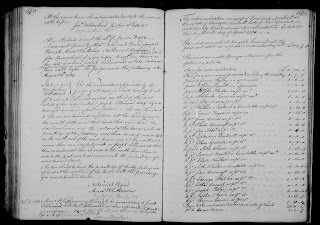 Now that Joseph Ellenwood/Ellingood's possessions had been inventoried, there
were two other matters that needed to be addressed. The first was Sarah Ellinwood's
which would be taken out from the real estate Joseph had owned.

The second was a guardian needed to be appointed for the two youngest Ellinwood
children, sons Jacob and Daniel. Jacob was 17 and Daniel 14 years old at their father's
death. I'm not sure why Amos Whittemore was made their guardian. There were
several adult male men in the county related to the boys either by blood  or by
marriage. I can find no such connection with Whittemore. The best I can surmise
is that perhaps it was thought that their best interests would be served if their
guardian was not someone who could use the position for personal gain.

Here's my transcription of the second document in Joseph Ellenwood's Probate
File.:

At a Probate Court the 18th of April A.D 1786
A warrant issued Messrs. Nehemiah Rand, Joseph Herrick, Amos Whittemore,
Nathaniel Burnham & John Runnels all of Lyndeboro to set off to Sarah Ellinwood
her dower in her late husband Joseph Ellinwood's estate who on their oath before
the Judge made the following return

August 15th 1786.
State of New Hampshire, Hillsborough }
We the subscribers appointed by the Judge of Probate for said County to set
off to Sarah Ellinwood widow, one third of the real estate of her late husband
Joseph Ellinwood late of Lyndborough deceased report as follows- The one third
set to the widow bound as follows all the land lying on the south of the road that
leads thru said land the dwelling house and the east end of the barn with the
priviledge of the floor way and three acres of wood land on the north side of the
road beginning at the northwest corner then running forty rods on Joseph Ellinwood's
land then 12 rods east then 40 rods to the north line then 12 rods to the first mentioned
corner with the priviledge of a road to said land.
The two thirds to have the priviledge of thirty feet square of land at the west end
of the barn with the priviledge of a road to said barn.
Nehemiah Rand
Amos Whittemore
Exam'd per Saml Dana Regr

Augt 15 1786 Amos Whittemore allowed to be guardian to Jacob Ellinwood and
Danl Ellinwood minors upward of fourteen years of age who with Joseph Ellinwood
gave bond in the sum of L200 for his faithful performance of that (?)
Attest Saml Dana Regr

To be continued.
Posted by Bill West at 2:36 AM