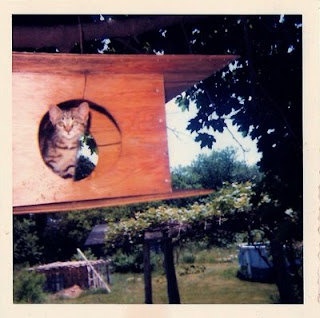 I've mentioned my Dad's country sense of humor before. Well,
this is a picture of one his more subtle jokes.

We were living in Marshfield at the time in a big old farmhouse
on Ocean St. There was an barn and some ramshackle pens
and sheds on the palce, and next to it was a big empty field
and woods than ran all the way down to the Marshfield Airport.
One Spring we found a pair of feral kittens someplace on the
property and took them in or tried to anyway.They had their
own ideas of what being domesticated meant!

Well, one afternoon, Dad went into the barn, I'm not exactly
sure why and emerged awhile later with this VERY large
birdhouse or feeder. I mean, alarge bird like a crow could
easily fit inside there, or perhaps a squirrel. We never saw
any in it, but what we did see were the kittens. They climbed
the tree it hung from and sit inside. I don't know for sure if
they ever caught a bird but they certainly must have
scared the heck out of a lot of them! Dad got a kick out of
watching the kittens sitting in there, waiting

The kittens are famous also for the refrigerator incident. We
shut them up at night in the small pantry where the fidge was
and one cold night they crawled in under it to get warm by the
motor. When my sister opened the door the next morning,
all she saw was their tails sticking out. She thought they had
died under there, but when we came to look, the two tails
swished back and forth and we lifted the fridge so they could
crawl back out.

The kittens eventually were put out in one of the sheds to sleep
once the weather got warmer but sometime that summer they
disappeared.I'm not certain if they wandered off on their own
or if their behavior earned them a ride in the car to a new
home. I can't recall what exactly happened to them.

But we've told the story of Dad's big birdhouse to his grandkids
and it still makes me laugh.
Posted by Bill West at 1:48 AM

What a priceless picture - and I love the expression of innocence on the cat's face.