THE WILL OF MOSES COBURN PT2 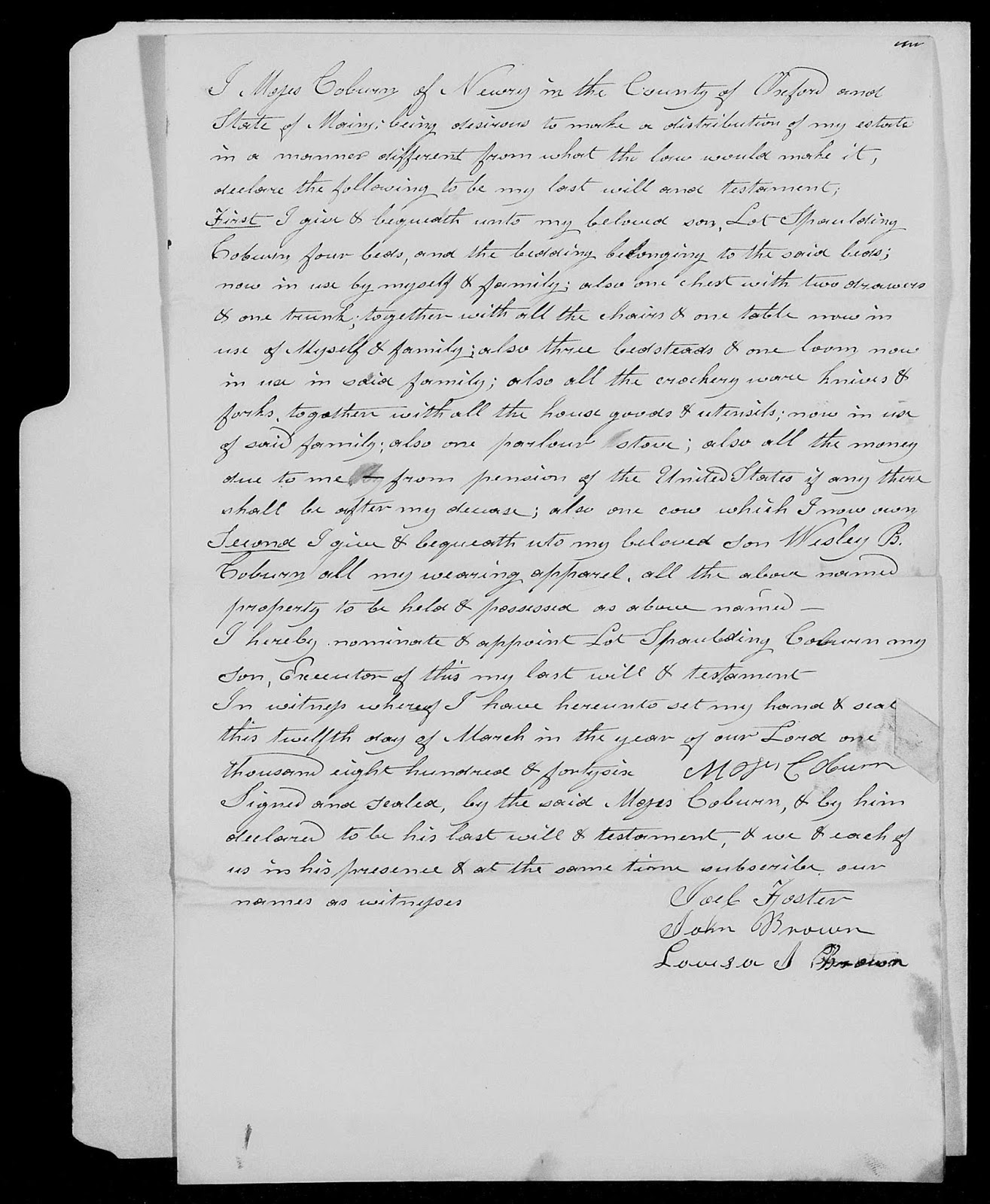 Here's the image of Moses Coburn's will and my transcription of it.

I Moses Coburn of Newry in the County of Oxford and the State of Maine, being
desirous to make a distribution of my estate in a manner different from what the law
would make it, declare the following to be my last will and testament,
First, I give and bequeath unto my beloved son, Lot Spaulding Coburn four beds, and the bedding belonging to the said beds; now in use by myself & family; also one chest with two drawers and one trunk; together with all the chairs & one table now in use of
Myself & family; also three bedsteads & one loom now use in said family;also all the
crockery ware knives & forks, together with all the house goods & utensils; now in use
of said family;also one parlour stove; also all the money due to me--from pension of
the United States if any there shall be after my decease; also one cow which I now own.
Second I give & bequeath unto my beloved Wesley B Coburn all my wearing apparel,
all the above named property to be held & possessed as above named--
I hereby nominate & appoint Lot Spaulding Coburn my son, Executor of this my last will & testament In witness thereof I have hereunto set my hand & seal this twelfth day
of March in the year of our Lord one thousand eight hundred & fortysix.
Signed and sealed, by the said Moses Coburn, and by him declared to be his last will &
testament, & we & each of in his presence & at the same time subscribe our names
as witnesses.
Joel Foster
John Brown
Louisa A Brown

My first thought is that Moses was much better off at the end of his life than when he
applied for his pension nearly thirty years earlier. I have to again wonder if that $ 135
in arrears pension money was issued as a lump sum because that would have made
him a moderately wealthy man.

Next, there are those whose names are not mentioned in the will. There's no mention
of his wife, my 4x great grandmother Esther (Spaulding) Coburn. Nor is there any
mention of his other children, including oldest son Moses Jr. I'll have to check and
see what I can find out about them and where they were at the time Moses made his will.

Next post, I'll discuss the inventory of the estate,.