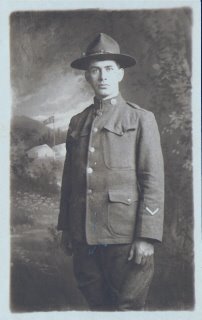 ((First posted in January 2008. I've done a little editing of the
original))

When journalists talk about a possible “bird flu” epidemic, the
historical event they draw parallels to is the Great Influenza
outbreak of 1918. It first appeared near Fort Riley Kansas in
January and by March had reached New York. Soldiers in crowded
barracks fell victim to it easily and troop movements helped spread
it quickly.

And in the midst of this my grandfather enlisted in the Army in April,
1918.


Then on 8 Sept. 1918 the first case of a new, more virulent strain was
reported at Camp Devens in Ayer, Massachusetts. By the end of the month
there were 14,000 cases of the illness and over 700 deaths attributed to it.
Camp Devens was placed under quarantine but the whole state of Massachusetts
was already swept by the disease as the figures on this site  show. My
grandfather was one the troops assigned to a medical detachment working
at the Camp Hospital.

Camp Devens’ hospital surely was not meant to deal with such a
catastrophic event and the accounts I’ve read while horrific must
pale in comparison to what my grandfather must have seen and
experienced. I wonder what he must have thought as he went
about his duties at the hospital? Growing up he must have heard
about the diptheria outbreak that had caused the deaths of six
relatives forty years before. Now he was in the midst of
something much worse where hundreds could die in a single night.
Did he wonder when he himself might begin to show symptoms
and end up a patient himself?

But he survived and was given a furlough at the end of November.
From what I’ve read, the epidemic began and expanded quickly
but subsided within a month and a half. By the end of October it
was over for the most part and by November the authorities must
have felt it was safe enough to allow Private West a furlough to
visit home in early December.


I can’t imagine they would have allowed it if he’d been stricken
with pneumonia during the height of the epidemic, so my guess is
that he came down with it sometime after he returned to
Camp Devens. The Army doctors must have felt the damage to his
lungs was sufficient to keep him from his duty as a hospital
orderly and so my grandfather was given an honorable discharge
on 12Mar 1919, less than a year after he'd enlisted.

Some soldiers in World War 1 saw hell on a battlefield.

Others, such as my grandfather, saw another sort of hell in
hospital wards full of comrades racked with the Spanish Influenza.

I used a variety of sources researching this post. One of them is
“Fever of War: The Influenza Epidemic in the U.S. Army During
World War I” by Carol R. Byerly, (NYU Press, 2005) which you
can preview at GoogleBooks.
Posted by Bill West at 10:18 PM

Meanwhile in Connecticut, in December 1918, my grandmother lost her mother, husband and a son to the flu pandemic.

Thanks for sharing and keeping the stories alive.