Fellow geneablogger Amy Johnson Crow of No Story Too Small has issued the 52
Ancestors in 52 Weeks Challenge. Basically, we have to post something every week
on a different ancestor, whether a story, picture, or research problem. I'm not done
with my Week 11 ancestor William Pinson yet and I'll return to him in the next post.
B ut for Week 13, my subject is my about my 5x great grandfather Samuel Haskell
This won't be a terribly long post. It concerns an item in his Oxford County Maine
Probate File which I found on FamilySearch.

Samuel Haskell was born in Harvard, Worcester County Ma. to Samuel Haskell,Sr.
and Sybil Willard on12 Jun 1749. Twenty one years later he married his fourth
cousin Ruth Safford (they were both descendants of William Haskell and Elinor
Cook) on  6 Dec 1770. They had twelve children, the last of whom was born in
1799, and sometime between then and 1810 the family moved from Harvard up
to Gorham, Maine. By 1820 they were in Waterford, Maine, where Samuel died
sometime before 18Jan 1826 which is the earliest dated document in the Probate
File. I'm not sure why it took ten years for the estate to finally be settled. Samuel
died in debt and there are several court orders that the estate be sold over the
course of that decade.Eventually an auction was held, and one of the items on
the list of what was sold caught my attention.

An auction was held on 8 Sept 1834 and the items fill two pages and part of a
third. Here's the image I found on FamilySearch for that page: 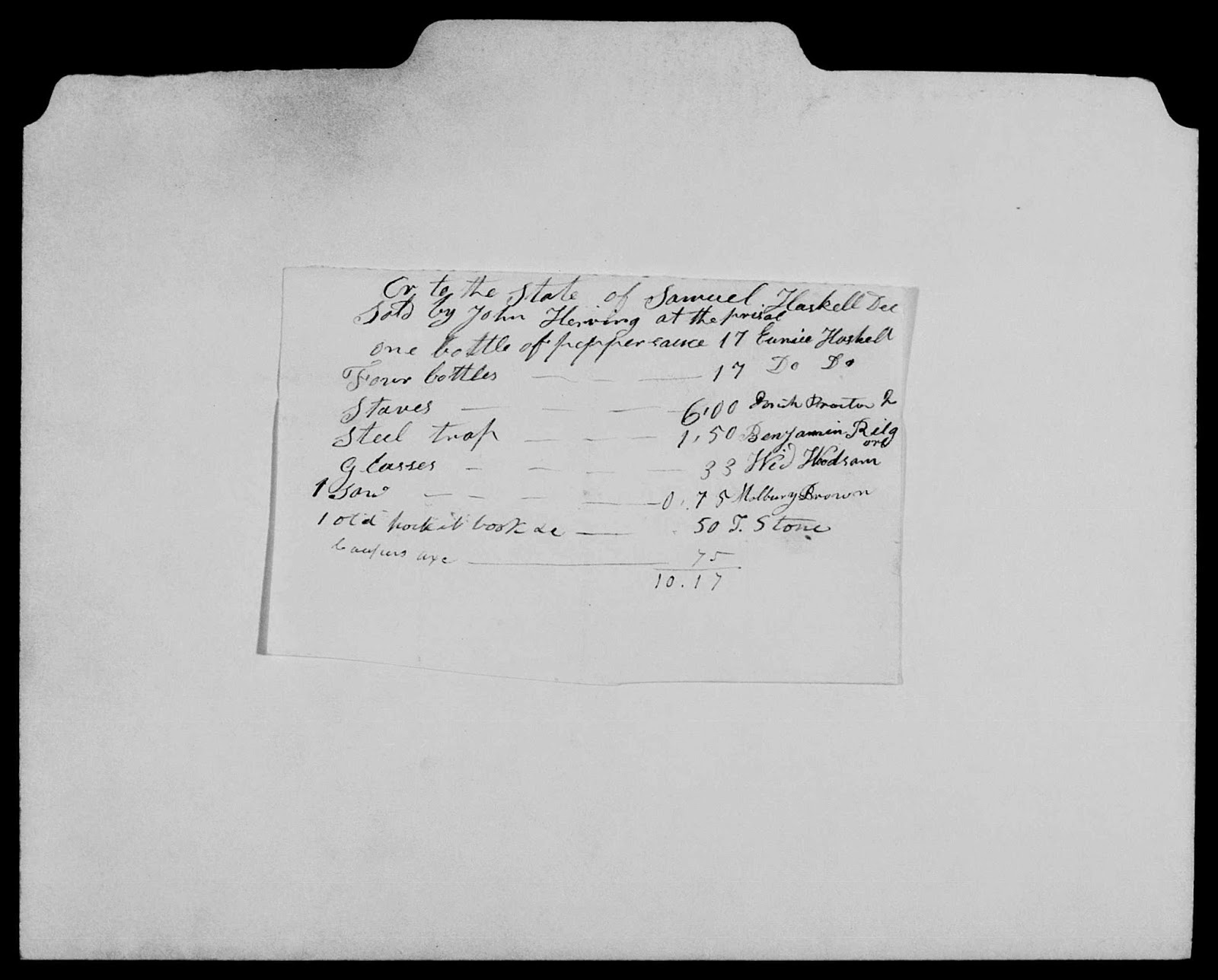 Eunice Haskell was one of Samuel and Ruth's children. The "Do" under her
name stands for "ditto". When I read what Eunice bought from her parents'
estate on that page I wondered why those two things. Ruth Haskell had died a
year after Samuel, so if Eunice bought the pepper sauce to eat and it was seven
years old, I'm not sure it would still be edible. Maybe it was something Eunice
herself had made since then on the premises since she was single and perhaps she
had stayed on at the family home after her parents died. Those other four bottles
she bought must have been empty, since there's no indication on the list that
they contained anything. Was Eunice going to make more pepper sauce and needed
those jars?

It's not a big question, just one of those things I run across in the Probate Records
that makes me wonder.