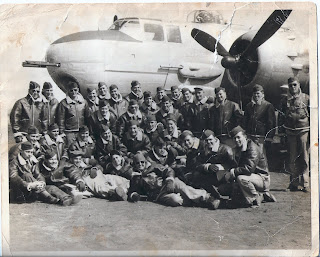 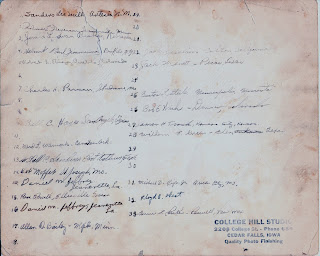 ((I'm reposting this today in hopes that perhaps the relatives of the men
in the photograph might one day find this picture of their veterans. First posted
June, 2008))


I think I may have posted this photo once before. It's from
when my Dad was training for the Air Corps during World
War II before he washed out due to inner ear problems.


On the back is a partial list of names of his fellow trainees,
and I'm posting that image now and my attempt at
transcribing it here in the hopes that the children and
grandchildren of these men might find it someday and see
how they looked in their uniforms before they went off to
war.


Because of the way the men are grouped it's hard for me to
assign names to specific faces. The only two I can are Michael
D. Piper Jr. and Lonnie (or Lennie?) L. Parker (?) standing to
either side of my father Floyd E. West Jr. at the far right end
of the back row. I think the first name is actually Lee Mill
Sanders and that he just signed the list "last name first."


I also noticed that Daniel M. Jeffrey's name appears twice.
The first entry is crossed over so I've assumed that either
someone else had posted the name in the wrong place or he
had done so himself and then corrected his mistake. I've
changed the first entry to "unknown".


So here they are. I wonder how many of them made it
home after the war, and I thank them for their service
to our country.

Do you know the place this photo was taken? I have a similar photo from my uncle, who trained for the Army Air Corps, too.

I'm not 100% sure but I believe it was at a training school in Ames, Iowa.