Yesterday was Election Day. The weather was sunny and cool here in
Southeastern Ma. and the polling place was at the high school just down
the street from my apartment so I layered up and walked down there to
cast my vote.  The line of cars waiting to get into the school parking lot
stretched the length of the street and there were campaign signs
along the side of the road and in the median strip. Supporters of various
candidates were mostly centered around the Revolutionary War Memorial
in front of the school holding signs and waving to the drivers as they came
and went. 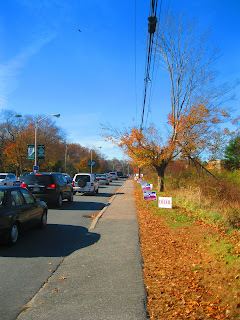 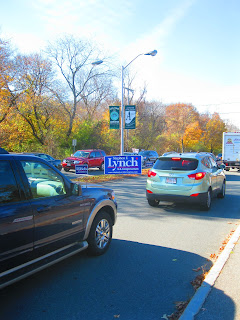 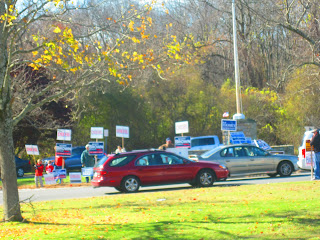 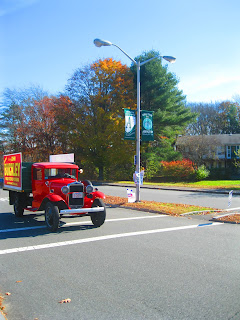 Voting was done in the school gym. It was busy but there wasn't a long line
and I was in and out in less than ten minutes. I'm a lifelong Democrat and
voted for President Obama and  Elizabeth Warren for Senator. On the
local offices I also voted for Democrats and one Independent. This area of
Massachusetts is more Republican than other areas so I'm sort of a "lonely
little petunia in an onion patch" on most election days here.

One of the things that hasn't changed in all the years I've voted here is the
Irish names of the state and local Democratic candidates: Lynch and Buckley
for example. This is the legacy of  late 19th and early 20th century politics
when the state Republican Party was anti-Irish immigration. It launched
the political career of  John "Honey Fitz" Fitzgerald who served as Mayor
of Boston and  was elected Congressman from the 9th Congressional District
in 1894, a district his great grandson Joseph Kennedy III won last night.

I finished filling out my ballot and when it went into the ballot box I learned
I was voter #543 in the town's 5th District. I was glad to hear from one of the
poll workers that there had been an even heavier turnout earlier in the day
with longer lines than normal. We agreed it was a very good thing and that it
was too bad there weren't similar turnouts for the local elections every year.

So that was my Election Day experience. I won't comment on the politics of it.
But I will say that I wondered if anyone would have thought fifty years ago that
an African-American incumbent would be facing a Mormon challenger and
neither of those facts were an issue in the election.

That's something about which I think we can all be proud.
Posted by Bill West at 2:35 PM

Even as recently as when I was an adolescent, and the first George Bush was running for office, my dad said he did not believe there would ever be an African-American (or female) President. He said he would like to see that happen in his lifetime, but he wasn't confident in it happening.

So you can imagine the 2008 and 2012 elections were very exciting for me, the daughter of a lifelong Democrat, who grew up agreeing with him!

I'm so glad it was such a beautiful day there for you.