THE WAR OF 1812 PENSION FILE OF NATHANIEL BARKER

A week or so ago one of my Facebook friends gave the heads up that the War
of 1812 Pension files were starting to be posted over at the Fold3.com site. (I
can’t remember who that person was now, but if you are reading this, thank
you!). So I visited the site to see what I could find. I have many male paternal
ancestors living in the right time period who could have fought in the War but
so far I only knew of two, Amos Hastings and John Griffith, who had served.
I was hoping to find evidence of more.

The bad news was that while Fold3 has indeed begun posting the 1812 Pensions,
they only have those for veterans whose last names began with the letters A or B.
Since I do have relatives in that group I began searching and found some Barrows
relatives, but more importantly, I found my direct ancestor,  3x great grandfather
Nathaniel Barker: 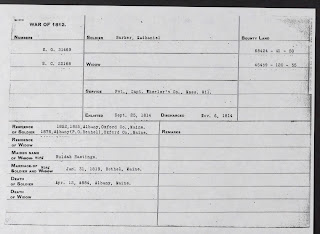 What's great about this first image is all the information. I already knew
Nathaniel and Huldah's marriage date, Jan 31, 1794. It always made me grin
thinking that maybe Huldah insisted on that date, January 31st, since it was
also Nathaniel's birthday and he'd surely have to remember it was also his
anniversary.  There was a discrepancy though in the date of Nathaniel's death:
the Pension File gave it as April 12th, 1884 while I had it a month earlier as March
12th, the date on his gravestone. But just today cousin Mary Ennis (who is
looking into the cause of Nathaniel and Huldah's deaths) emailed me that
she had found a mention in the Oxford Democrat newspaper which gave the
April 12th date as the day he died as well. I've made the change to my gedcom
file. (Thanks, Mary!)


The really interesting thing for me was seeing that Nathaniel had applied twice
for a veteran's land grant but there were three entries for places of residence
in 1852, 1855, and 1878. What was that all about, and how does that figure into
what I already knew about Nathaniel and Huldah?

The more one learns about an ancestor or two, the more there is still to question, eh?! Lovely find, Bill.