I missed the first New England Geneablogger Bash last fall but thanks to
Erica and Mike Voolich I was able to ride down with them to the second
Bash.  This one was being hosted by Sara Campbell at her cottage in Eastham
on Cape Cod here in Massachusetts.

The day got off to a hectic start for me because of an alarm clock malfunction.
I'd set the alarm for 8am but I didn't wake up until 9:15 because the alarm
never went off.( Apparently there was a power outage sometime overnight
and I didn't have a fresh battery backup in the clock.). So I spent a half hour
rushing around getting washed and dressed and I was ready when Erica and
Mike arrived. The trip down was pleasant even with the hour long traffic
backup at the Sagamore Bridge.

It was a beautiful day with not a cloud in the sky and when we arrived
the other geneabloggers were already enjoying the sun and view of the
ocean from Sara's deck. 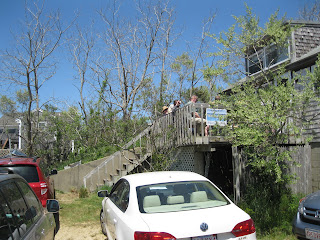 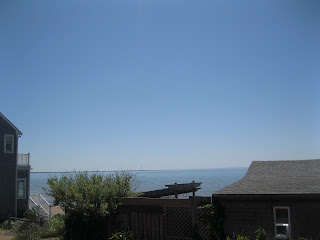 I'd been wound up for a few days over meeting people whose blogs and research
I'd admired for several years now, but everyone was so nice I was able to relax
and enjoy the conversation.  I got to meet Heather Wilkinson Rojo, Midge Frazel,
Mike Maglio, Russ Worthington, Tim Firkowski, Elizabeth Pyle Handler,
Diane MacLean Boumenot, Erica Voolich and Sara Campbell and their significant
others ! Everyone had brought along some food for the meal and there was all
sorts of genealogy stories and information traded back and forth all day.

We even had an uninvited guest, a tenacious bee that hovered in place many times
over us, so Tim and I started taking pictures of it with our cameras: 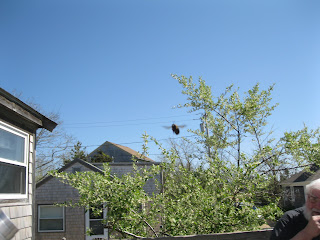 We hadn't taken a group photo earlier so Midge and Mike had already left before
we did: 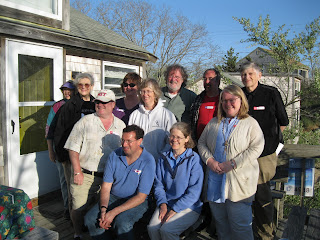 Finally it was time to say goodbye and head home. Mike and Erica took me to
a nearby place they knew about for a fish and chips dinner, and then we headed
back up Rte 6. There was another delay at the Sagamore Bridge but eventually
we made it off the Cape and I was home by around 9:30pm.

It was a great day and I want to thank Mike and Erica for letting me ride along
with them, and Sara for her hospitality. And thanks to all for making me feel
at ease.

I hope to see you all again at the next Bash!
Posted by Bill West at 2:12 AM

Thanks Bill for the very nice write-up and photos. I'm so glad you had a good time, and you met many bloggers.

I was delighted to finally meet the man I call "the classic New England gentleman".

I was sorry we didn't meet before I moved away from the area that we both lived in so I was hoping that you could be there at the Bash.

We loved having you with us in the car -- your company made the traffic jam go by faster by your wonderful conversation.

It WAS a great day for meeting people whose blogs I've been reading and enjoying. A blessing to me.

Wow, what a lovely day and a beautiful setting for a geneablogger meeting. Thanks for sharing!

Nice to meet you too, Bill. The bee was asking about you this morning...