A LETTER FROM RETURN ELLINGWOOD JANUARY 1825 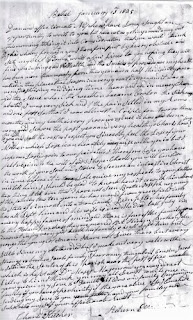 I recently came across this on Ancestry on a family tree owned by
John K.(I don't want to give his full name without his permission ahead
of time). I asked hin if I could use it and he's graciously given me his
permission.Not only was it nice to discover a piece of family history,
it's nice to come into contact with another cousin!

Return was the youngest daughter of Joseph Ellingwood and his wife
Sarah. She never married and lived for a time with her brother John,
my 4x great grandfather. Apparently after John had become ill or
died she was taken care of by the town of Bethel Maine where she lived
until she was "struck off" to the care of someone named Peregrine Bartlett
in 1831.

This letter was written six years before then. According to John K, it was
in reply to a letter from her nephew Charles Fletcher telling of his mother
Martha Ellingwood's death. Return's reply is full of news of the family:

her brothers' illnesses, their children moved off and married, She says her
brother had moved to Vermont but the town Lempster she mentions is in
Sullivan County, New Hampshire, not far from the border with Vermont.

Return's generation was part of the westward expansion out of New England.
Her brothers Benjamin Tuck Ellenwood, Daniel Ellenwood and her sister
Martha Ellenwood Fletcher had emigrated to Ohio. Two of her brother Joseph's
sons moved to upstate New York and a third eventually settled further out in
Indiana. Their children would move further on to Iowa and Nebraska..

I've transcribed the letter line for line as close as possible. Where I'm not sure
of a word a bold faced (?) appears.

Thanks once more to new-found cousin John K!

Bethel January 18th 1825
Dear and affectionate Nephew, I have long sought an
oppurtunity to write to you but have not as yet improved any but
this morning taking it into Consideration that you would think
I had wholey forgotten you I therefore put by every obstacle and
Set myself Down to write a few Lines to you hoping they will find
find you enjoying good Health and the Smiles of providence. my health
has been more than useuly poor this year and a half the Disintey(Dysentery?)
prevailed in this place that Season in a very great Degree and it was a
very Distrissing and Dying(?) time  hear but god in mercy chan-
-ged the Scene when the weather became Cooler the Sickness
abated. I was very Sick and the pain Setled in my Arms
and one foot So that I was allmost a Criple for two or three
months and my health is very poor eversince it has been a
very good Season the past year and very healthy o Charls how I long
to see you and all the rest as I expect you Sincerely feel the Loss of your
Mother which Loss I can heartily say I side (?) with you in but I
hope our Loss is gain to our parents I therefore hope you have
felt resind to the will of god I hope Charls you will Consider
the worth of your Soul and Strive to Secure an interest in Christ
in time before it is too Late give my respects to your father
and tell him I should be glad to know how it is with him about
these thing tell him that I have not Seen Brother Joseph nor any
of the family this ten years he has moved from greenefield into
the State of Vermont into a town around(?) Lempster his family
has all Left him and his wife is Dead She Died last July in
a very happy frame of mind and there is four of the family gone
to the (?) Purchase they are all married but Hiram  Brother John
Doesn't enjoy very good health his family is all Left him but
George the youngest son and I have not Lived there but
Little Since my Mother died but I make out very well
with Strangers brother jacobs family I dont hear anny thing about Cousin Jacob
is Settled in the Senter of this parish near the post office
which is kept at Dr Moses Masons and you may Direct
Letters to him I think you may all Least write once a
year (give?) my Love to Daniel's Widow and family Benjamins
family if you have oppertunity if they are alive So I Conclude
Sending my Love to you and your familey and
Subscribe myself your affectionate Aunt
Return Ellenwood.

Letters are such a neat way to peek into a family's past. She says, "but I make out very well with Strangers" and then directs him to write to her care of a cousin. I wonder if she moved from family to family?

Nice job with the transcription.

The post office would have been at Dr. Moses Mason's house in Bethel. The house still stands, and now belongs to the Bethel Historical Society.

Thanks, Cousin Chris! The first s in the name looked like a j but looking at it now I can see the mistake. I've made the correction.

Good Afternoon, If you have not found this material, "Our Ellenwood Clan" by Nellie Gard, then you might like to take a look at it for your family history. It will take you back to Main and probably earlier. There should be a copy of it in every state library also the family history room in Salt Lake has one also. or contact me at abcfhist@hotmail.com. Beth