As you can see from the above photo, I come from a long line of hardy
Maine people who thought nothing of going out to work and play in
harsh Winter weather. From left to right, that's my grandfather Floyd E.
West Sr., his father Philip J. West, and his stepmother Alphonsene
Turgeon West. The caption says "Some catch taken in Spring,1923"
and that would refer to the wildcat or bobcat slung over P.J.'s shoulder.
Of course, technically, it isn't a Winter photo but the weather conditions
are wintery.


As for myself, I take after my Mother's side of the family. I can't say all
Irish American's have a similar view but I do know both Mom and her
brother, my Uncle Ed, weren't the type to love the sight of the first
snowfall. My earliest memories of snow involve the house on Beach St.
in Malden. I have some pictures taken one winter day there. The first
is looking over towards Clapp St, which was one house away from ours.
The other is looking over towards the other side. Up until now I didn't
know what street those other buildings in the distance faced but a quick
look at Google Maps just now told me it's Springdale St. 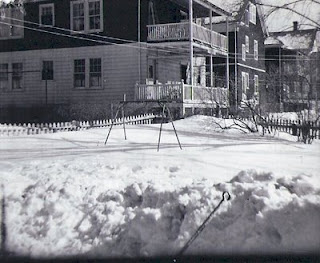 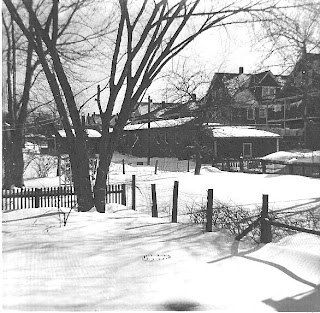 There was a long driveway that opened up into a wide parking area
between our house and the Tedesco's next door, and in the early to mid
fifties, in the pre-snow blower age, everyone shoveled.(unless you were
lucky to know someone who drove a snowplow who'd do plow you out
when he did your street). The other photos show my Mom doing some
shoveling. I'm certain she did not do all that herself, but was probably
clearing the end of the driveway after the plow went by so that Dad
and Uncle Ed could get in when they came home from work. I suspect
my Aunt Emily took the pictures.

Meanwhile, as the adults worked, my cousins and I looked on,
mostly because we were too young to do much shoveling and besides,
we probably couldn't move much bundled in those snowsuits! But we
did make snowmen and have snowball fights and sled, having the
fun any kid has in the snow, heedless of the cruel shock that loomed
ahead of us like a tree at the bottom of the hill: adolescence and
snow shovels and the dreaded words: "Go help your father shovel the
driveway!" 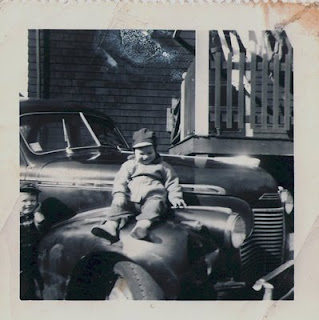 Written for the 64th edition of the Carnival of Genealogy
Posted by Bill West at 2:07 PM

My grandparents had a shared driveway that ran right between the houses so when you shoveled you had to move the snow either to the front yard or back yard. No fan at all! It sounds like there were plenty of adults to help though.

The older I get the more I understand living in warm weather year round! Your story brought back a few memories of shoveling my grandmother's driveway (after we got done with our house, we drove over to hers to shovel her out!) She also shared a driveway with her neighbor, so there was a lot of shoveling and shoveling and shoveling to move that snow! The reward for all that work....my grandmother was a GREAT cook! The food she made....yummmmmmmm, plus, she had a television and we didn't-just an extra bonus to MOVE that snow fast! Thanks for sharing.