Ten years ago I discovered the World War 1 Draft cards for some of my male family
members over at Ancestry.com. I posted what information I learned from them here
on March 2, 2007 . So I thought I'd repost the information  at this time in observance
of the 100th anniversary of the end of World War 1.

The first five are my Mom's maternal  uncles, the McFarland brothers: Tommy, Frank,
Bobby, John and Mike. I don't remember ever meeting the last two brothers but we visited
Uncle Tommy and Uncle Frank many times when I was a kid. Uncle Tommy shared my
love of books and had a set of the Encylopedia Brittanica. Uncle Frank taught me how
to make tomato and mayonnaise sandwiches.

Here's what I learned about them from the cards.

Tom lists his occupation as a toolmaker at A. A. Crafts at 125 Summer St.in Boston.
For dependents he lists his father and mother who would have been in their late sixties.
His physical description is Medium height, Slender build, with Brown (or Blonde?) hair
and Brown eyes. At the time he filled out the card he was living at 950 Parker St. in Boston.

((By the 1950's he had white hair and he smoked a pipe. For some reason I remember
him wearing a shirt and tie most of the time. He was working in the jewelry business by
the time I came along and he and his wife lived in a nice little white house in Milton He
died in 1977 at the age of 84 .))

Frank was living with his family at 50 Cotton St. in Medford. He lists his occupation
as "bottling" at the Moxie Plant at 69 Haverhill St. in Boston. His eyes were Gray,
his hair Dark Brown; his height and build were given as Medium.
((I remember Frank with grey hair, wire-rimmed glasses and a cane. He stayed with us
at few times at the Capen St.apartment in Dorchester which was where he taught me
howto make those tomato sandwiches. He lived with his son John in Andover, Ma. and
died in 1986 at age 82.))

Robert was living with his family at 121 or 126 Paul Gore St. His occupation was
shoemaker at the Thomas J. Plant(?) Shoe Co. at what looks like the "corner of
Centre and Bickford Streets" in Boston. His height and build are Slender, his eyes
Light Brown and his hair Black.

Mike was living at 946 Parker St in Boston with his wife Mary and he was a shoe
worker at George A. Keith Company at 288 A St.in So. Boston. His height was given
as Tall, his build Medium, his hair Dark and Brown for the eye color. He was the oldest
child in the family and the only one born in Ireland. 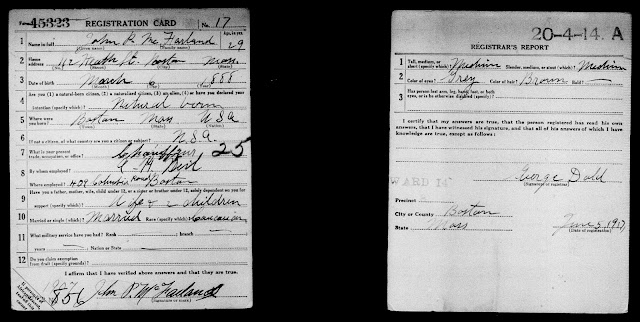 John was working as a chauffeur for someone at 409 Columbia Rd in Boston but lived
with his wife and children at 112 Heath St in the Roxbury neighborhood of the city. He's
described as of medium height and weight and having  brown hair and grey eyes.


Then there are the cards for both my grandfathers. 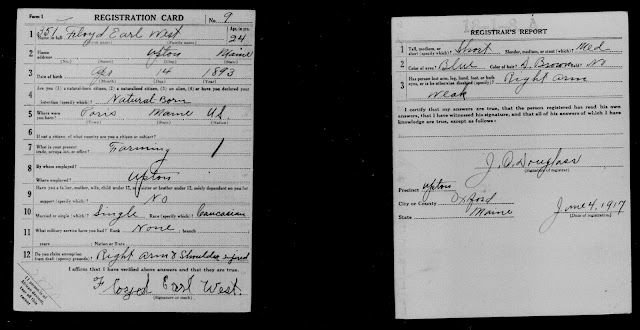 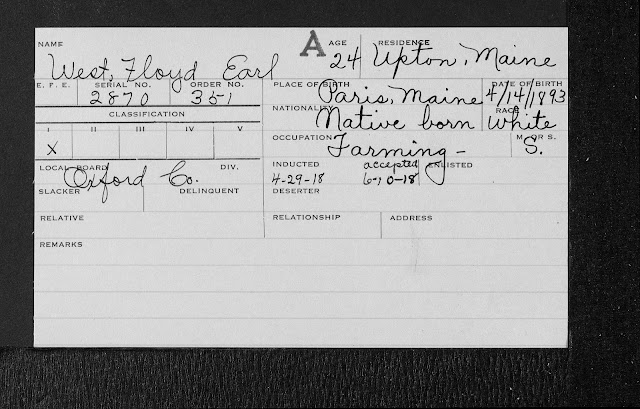 Floyd Earl West gives his occupation as farming in Upton, Me. His height is listed as
Short, his build Medium, his eyes Blue and his hair “D. Brown” He claimed an exemption
from the draft due to an injury to his right arm and shoulder; on the disability line he
adds “right arm weak”. But whatever the injury was it healed because Grandpa West
did get drafted a year later and was inducted(?) on 29 Apr 1918. He reached the rank
of Pvt 1st class in November of 1918 and served as part of Company K, 303 Infantry.
He never made it oversea, though  because he ended at  Camp Devens, Ma. during the
outbreak of the Spanish Influenza where he helped with the patients.. He was honorably
discharged on 12 Mar 1919 after contracting pneumonia.

Finally, my mother’s father, Edward F. White lists his occupation as “helper” on the
“N.Y., N.H., & H. R..R. & Co.” by which I take it to mean the New York,
New Haven, and Hartford Railroad. The business address is given as Union Station
in Harftord. He gives his home address as 41 Philbrick St in Roslindale Ma. and lists
as closest relative his mother “Lena White”. His height is Tall, build Medium. His eyes
were Blue and his hair Dark Brown. This card was a real find for me because it filled
the blanks about that part of the family. Mom never talked about her father and I
never met him.

Grandpa West is the only one out of this group that I've found to have actually
served in the military during World War I. But the McFarland brothers were all in their late
twenties or older and Grandpa White might have been exempted due to his occupation.

All the images in this post are from the "United States World War I Draft Registration Cards, 1917-1918," database with images, at FamilySearch
Posted by Bill West at 8:11 PM