THE VALUE OF A COMPASS PT1 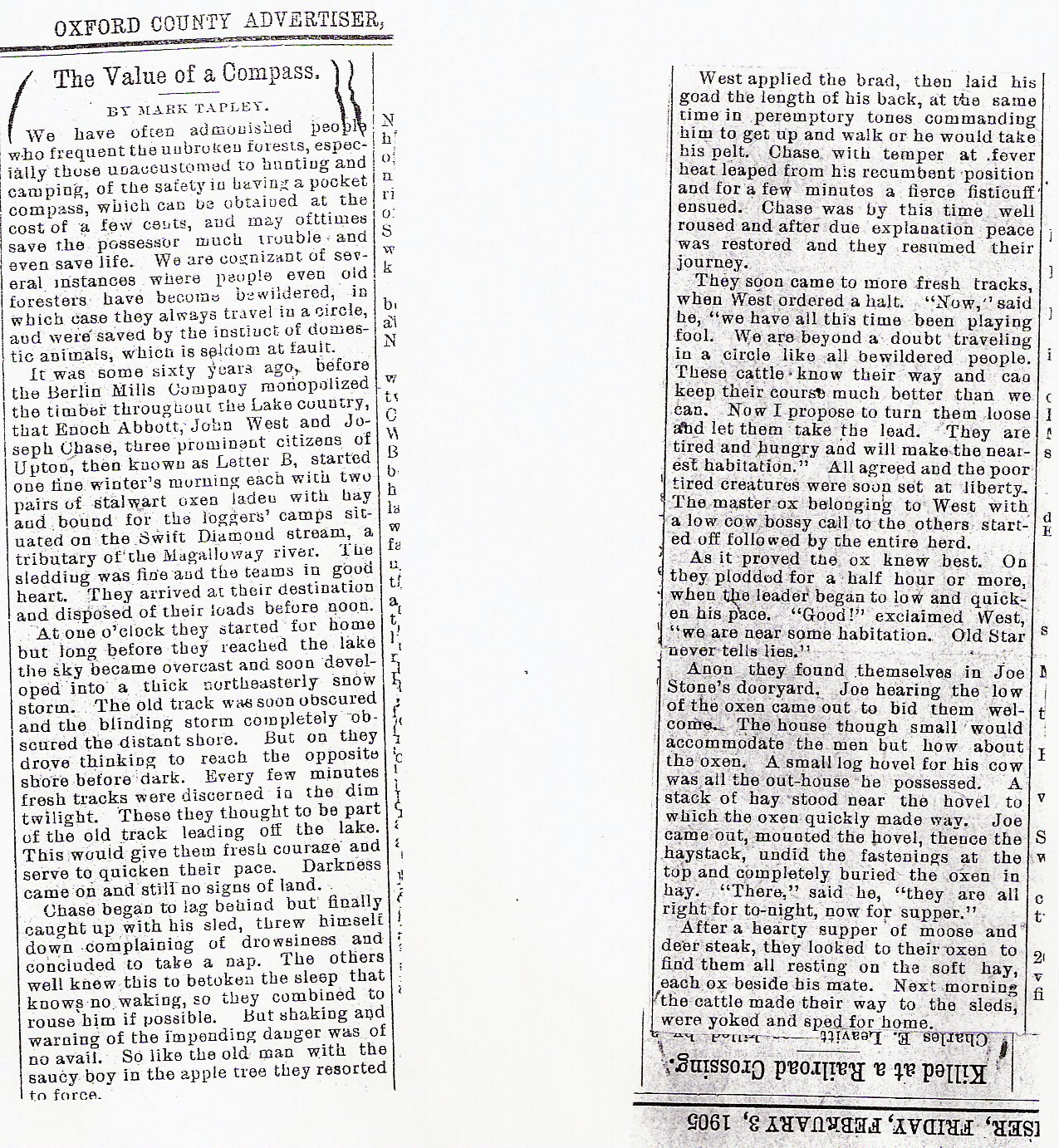 I've posted about this incident before but never actually transcribed the article
until now. It's about my3x great grandfather and two friends, Enoch Abbott and
Joseph Chase lost in a snowstorm in northwestern Maine. As we just weathered
the Blizzard of 2015 here in Massachusetts, I thought this was appropriate:

The Value of a Compass
by Mark Tapley

We have often admonished people
who frequent the unbroken forests, espec-
ially those unaccustomed to hunting and
camping,  of the safety in having a pocket
compass, which can be obtained at the
cost of a few cents, and may ofttimes
save the possessor much trouble and
even save a life. We are cognizant of sev-
eral instances where people even old
foresters have become bewildered, in
which case they can always travel in a circle,
and were saved by the instinct of domes-
tic animals, which is seldom at fault.

It was some sixty years ago, before
the Berlin Mills Company monopolized
the timber throughout the Lake country,
that Enoch Abbott, John West, and  Jo-
seph Chase, three prominent citizens of
Upton, then known as Letter B, started
one fine winter's morning each with two
pairs of stalwart oxen laden with hay
and bound for the loggers' camp sit-
uated on the Swift Diamond stream, a
tributary of the Magalloway river. The
sledding was fine and the teams in good
heart. They arrived at their destination
and disposed of their loads before noon.

At one o'clock they started for home
but long before they reached the lake
the sky became overcast and soon devel-
oped into a a thick northeasterly snow
storm. The old track was soon obscured
and the blinding storm completely ob-
scured the distant shore. But on they
drove thinking to reach the opposite
shore before dark. Every few minutes
fresh tracks were discerned in the dim
twilight. These they thought to be part
of the old track leading off the lake.
This would give the fresh courage and
serve to quicken their pace. Darkness
came on and still no signs of land.

Chase began to lag behind but finally
caught up with his sled, threw himself
down complaining of drowsiness and
concluded to take a nap. The others
well knew this to betoken the sleep that
knows no waking, so they combined to
rouse him if possible. But shaking and
warning  of the impending danger was of
no avail. So like the old man with the
saucy boy in the apple tree they resorted
to force.

To be continued, like all good cliffhangers.
Posted by Bill West at 2:02 PM

Just wanted to let you know this post and the following three were highlighted in my Friday Finds and Follows: 30 January 2015 post on my genealogy blog, AnceStories: The Stories of My Ancestors.