I've written before about contacts I've made with relatives through this blog.
The latest instance of this happened about a week ago. I've done posts about
my Mom's parents and how after their divorce there had been no contact with
my grandfather Edward F White Sr or his family.  We had no pictures at all of
any of them because either my Mom or Grandmother Agnes threw out any
pictures at some point after the divorce.  Acts of genealogical kindness from
Michelle Robilliard and Pam Hatton I was able to find where my grandfather
was buried and contact one of my uncles by his second marriage.

Then about two weeks ago I received an email with this photo of my great
grandmother Pauline Offinger, Edward's mother. 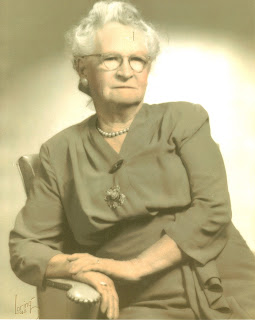 The sender is my second cousin, a descendant of my grandfather's older brother.
I sent him my phone number and a day later we had a great phone conversation
and exchanged information. He mentioned I should talk with his father, and
the next day I did.  it was another great talk, and we made plans to meet for
lunch at the Chinese restaurant down the street from my apartment.

So today I met my first cousin once removed for the first time.(I haven't used
either cousins' names for privacy reasons). I was a bit nervous about it but
he is a nice guy and east to talk with. He brought some family pictures and
in one I noticed a family resemblance between one of my great granduncles
and my Mom and her brother. There was no pictures of my grandfather, though,
because apparently he didn't keep in touch very often with the rest of the
family either. We both agreed that it was too bad the division between our
two sides of the family had gone on for so long, and I hope to meet more
of my white family relatives soon.

And we might never have met if I hadn't written those posts about my
grandfather here in this blog!
Posted by Bill West at 1:15 AM

Glad you had this opportunity, and also happy it went well. When we notice family resemblances like you mention, we often say, "The little ones look like the big ones". It's true for many.

Great news! So glad you were able to make a connection.

Lovely results, Bill. And after so long a period of time, too. Cheers for cousins!