THE QUESTION OF LIZZIE ELLINGWOOD BLANCHARD

I've expressed my belief many times here that sharing genealogical research
online is a good thing because of the things you can learn and the contacts you
make with people who've seen your family tree or genealogy blog. Here's another
case in point.

This last Tuesday I received this message from K.(I am not giving her full name
out of respect for her privacy)through my tree on Wikitree :
"Hi Bill, I bought a home that was owned by Fred H Blanchard. I am trying to find
information on his first wife and mother of his children Eliza Ann Ellingwood.
We found several letters from the children to their father but we can not find
much info on what happened to Lizzy...."

I checked my RM5 database here on  my computer. The only Eliza Ann
Ellingwood I could find was a daughter of my 2x great granduncle Isaac  Harris
Ellingwood who'd died in 1859  before she'd turned three years old. But when I
doublechecked that against the source it came from, Florence O'Connor's book
on the Ellingwoods I realized I'd missed an entry: On page 37 under "Children
of Isaac and Columbia Ellingwood Eighth Generation"  is the following:

After kicking myself mentally for missing that, I used the information as a
starting point and using documents I found on FamilySearch and Ancestry,com
I was able to able to find more. This was what I sent back to C. along with some
of the documents I found:

"Hi K,
Sorry it took so long to get back to you. I needed to do some research
on this, since I somehow missed Eliza Ann when I was entering the
family into my data base. It might be because she was the second
child of Isaac Harris Ellingwood and Columbia Briggs named Eliza Ann.
The first had died two years before Eliza Ann Ellingwood Blanchard
was born. Eliza is my first cousin 3x removed.

As best as I can figure out, she died sometime between the birth of
her son Adnah on Jan 14 1882 and Fred's marriage to Anna A Hutchinson
on Jan 10 1886. It's possible she died in childbirth or shortly
afterward which was all too common back then when many children were
born at home and infections were easy to develop. I've been trying to
find a record of her death or burial but so far no luck
. 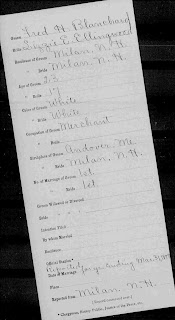 I don't know whether or not you already know what became of the
children so I thought I'd share what I've found about them They all
seem to have ended up in Rhode Island:

Helen was born May3 1879 in May 3 1869 in Milan, NH. She married Lewis
Whipple on Sept18, 1907 in Berlin, NH. Lewis was a construction foreman
from Providence R.I and Helen was a schoolteacher. I've traced them through
the U.S. census from 1910-1930 in Cranston and then Providence R.I. I found
no record of children. Lewis kept working in the carpentry and home construction
business but Helen apparently didn't continue with teaching. 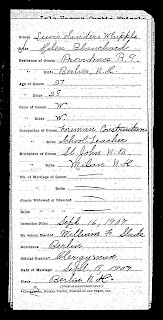 Jessie was born on June 24h, 1880 in Milan. She married John Joseph
White on Jun 18th 1899 in Rhode Island. He was a jeweler working in Cranston
RI and eventually had his own company. The 1930 Census said he was
making $50,000 a year and the family was well enough off to afford a
cook. Jessie and JJ had three sons and one daughter: Frederick, Reginald,
Milton, and Patricia. Sometime after 1930 either JJ died or they were
divorced because Jessie remarried in 1946. Ironically it was to her
(very) distant cousin Clarence Howard Ellinwood.(all Ellingwoods/Ellinwoods
/Ellenwoods are descended from Ralph Ellinwood of Salem Ma.[1607-1673]).
She died a year later in Falmouth, Ma on July 29th 1947. 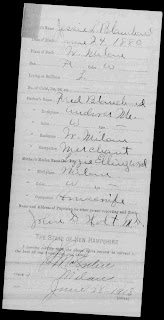 Adnah was born 14 Jan 1882 in Milan. He's an interesting person. I couldn't
find him on the Censuses and I suspect it is because he was out of the country
a lot. As early as 1912 he was visiting Honduras in Central America. He seems
to have worked out of Georgia and Alabama but by1918 on the WWI Draft
Registration card he gives his residence as being Cranston, R.I. and he was
working as the manager of the Blanchard Manufacturing Co. He died in
Jacksonville Florida on April 13th 1940 but was buried back in Cranston. I've
found no record of a wife or children." 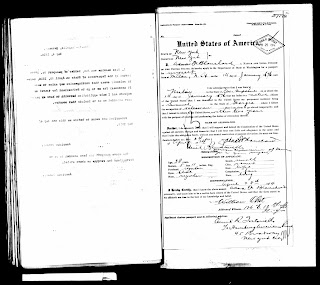 Now, K. is not related to the Blanchard family but as she said she and her
husband had found some letters because they had purchased the Blanchard
house and in the process of remodeling it have found letters hidden there.
They date from the late 1890's which was after Lizzie's death and Fred's
marriage to his second wife, Annie Hutchinson. When K. and her sister
C. searched online for information on Eliza Ann Ellingwood from Milan NH
they found my Wikitree entry, and because they contacted me, I've been able
to correct my database and add new names to it.

And there is an Ellingwood connection with their family after all. I'll talk about
and the letters in another posting.
Posted by Bill West at 11:21 PM

This is such a great story. Those letters will be priceless as well!

Thank you, Bill, for the reminder that there's always something new to learn. I enjoyed reading about your new "old" information