THE GIPSY IN THE FAMILY 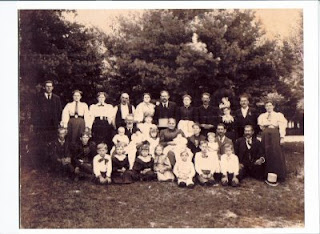 One of the items my Aunt Dorothy (West) Bargar gave me was the above photograph
of my 2x great grandparents Amos Hastings Barker and Betsey Jane Moore
and their family. She also included a list of the children and their spouses. One part
in particular sparked my curiosity: “Gipsy wife of Arthur Barker”. This puzzled me
at first. Did this mean Arthur Barker had married a gypsy?  She’s the last person in
the back row on the right, standing behind the top hat on the ground.

I  started paying attention to my ancestors’ siblings and their families within
the past year.My Barker ancestry is one with a first cousins marriage: my great
grandmother Charlotte Barker (she’s the second person in on the left of the
back row, the lady wearing what looks like a man’s necktie.)was the daughter
of Amos and Betsey Barker, She married her cousin Frank Wesley Barker, the
son of Nathaniel Barker and Lucy Coburn. Nathaniel and Amos were brothers.
It turns out that Charlotte and Frank were not the only Barker cousins who had
married each other.

Gipsy Barker was the daughter of Daniel Barker, another brother of Amos and
Nathaniel. She was born 26 Aug 1870 in Weston, Aroostook, Me and her mother
was Roseanna Murphy. I’ve no idea why Daniel and Roseanna named their daughter
Gipsy. They seemed to have a penchant for unique names. They had, after all,
named their son Benedict Arnold Barker. Gipsy married Arthur on 11Nov 1888
in Weston and the couple took up residence there at first but by 1900 were living
in Bethel Oxford Me with their two daughters. On the 1900 Census Arthur’s
occupation was given as a sawyer at one of the mills but by 1910 he’s
a day laborer.

I haven’t fund the family on the 1920 Census yet and when  I found them on
the 1930 There were some big changes. For one thing, they were no longer
living in Maine, they were in Washington state and they were no longer living
together.  Arthur was living with their daughter Fannie and her husband Josiah
Remick in Port Angeles where he would die in 1934.His marital status is
“divorced”. Gipsy was living in another town, Sexton, Washington with  two
of her granddaughters Helen and Alice Fisher. The Census says Gipsy was a
widow but since Arthur didn’t die until 1934. Either someone gave the
enumerator the wrong information or it was a case of wishful thinking on
somebody’s part. Apparently daughter Natalie and her husband Floyd Fisher
had divorced  and Gipsy was watching the children while Natalie was off
looking for work or another husband.

Natalie (Barker) Fisher married Frank Risley Barker in British Columbia on
31Mar 1931.He was a logger by trade, He was also Natalie ‘s first cousin.
His father was Gipsy’s brother, Benedict Arnold Barker!

Gipsy died in Snohomish Washington in 3Mar 1954. She certainly lived up
to her name, having started her life on one coast of the country and ending it
on the other,

((507 words for the Family History Writing Challenge))
Posted by Bill West at 2:33 AM

Great post, Bill. It is amazing what people will name their children. I wonder what young Ben felt about his name?

There are exotic name choices, and then there are ... really puzzling name choices. My Dad had a sister named Pocahontas. And it's amazing how many people elected to represent themselves as widowed when they were actually divorced or separated.

Wow, all of those names are familiar. Ruth Leone (West) Barker used to talk about Gipsy and Roseanna Murphy.
We're not sure how she got all the family information since Jack Risley Barker, or Dad, son of Alma and Frank Risley Barker, never really talked about his family.

Pamela, what are your West roots? Are you out in Washington state or here in New England?

My West roots are I am the daughter of Jack risley Barker and Ruth Leone (West) Barker and was born in Washington State.My mother's parents came from Bergen,Norway but it's hard to find any info before then because of the shortening of thier last name to simply West
when they immagrated to USA